For any complex society to function properly, individuals--be they people or social insects--must reliably recognize their friends and family with whom they live and work and readily distinguish those allies from strangers. Ants and other social insects manage this feat of recognition based on chemical pheromones, which are detected via sensors in their antennae. Now researchers reporting August 13 in Cell Reports have discovered that when it comes to assessing body odors, ants really don't miss a thing.

"To our surprise, these very low volatility compounds are not only detected sensitively by specialized antennal sensors, but almost all of the hydrocarbon components are detected," said Anandasankar Ray of the University of California, Riverside. "Using this amazing high-definition ability to smell 'ant body odor,' the ants can recognize the various castes in the colony as well as intruders from another colony."

This broad-spectrum ability to detect hydrocarbons is unusual and is probably a special property of social insects, the researchers say.

Ray and his colleagues employed a powerful electrophysiological method, which allowed them to systematically test the response of individual neurons in the ant antennae to hydrocarbons found in the cuticles of worker ants and their queens. Their method allowed them to determine exactly which chemicals triggered a response in the ants' sensory system, a level of detail that had never been achieved before.

The ants' high sensitivity to pheromones allows detection of very few molecules of hydrocarbons that stick close to the cuticle surface. This ability apparently allows individuals to recognize those ants that are very close to them within the crowded colony.

"This is a remarkable evolutionary solution for 'social networking' in large colonies," Ray explained. "A more volatile body odor cue would be confusing to associate with an individual and could overwhelm the olfactory system of the colony members by constantly activating it."

The researchers suggest that ants may be capable of responding not just to the presence or absence of particular hydrocarbons but also to the particular way in which various hydrocarbons are blended. In other words, pheromones might act as a kind of "chemical barcode," which individuals in a colony use to recognize other members within the nest and their status as workers or queens.

Perhaps ants are brainier than we've given them credit for, the researchers say. After all, their incredible talent for olfactory discrimination depends not only on sensitively attuned neurons and an impressive collection of odorant receptors--ants have the largest odorant receptor gene family known in insects, with the Camponotus floridanus ants in this study having more odorant receptors than humans do--but also on a remarkable ability to learn and differentiate between closely related hydrocarbons. As evidence of this, Ray and colleagues showed that ants were quick to associate particular hydrocarbons with a sugar reward. They could even discriminate amongst hydrocarbons that differ from one another only ever so slightly.

As they close in on the functional roles of the ants' odorant receptors, the researchers say they are particularly interested to find those that detect pheromones from the ant queen. Those cues from the queen are largely responsible for keeping the colony in order.

This work was funded by the Howard Hughes Medical Institute Hughes Collaboration Innovation Award. Anandasankar Ray is the founder and shareholder of Olfactor Labs, Inc., and Sensorygen, Inc. Both Ray and Laurence J. Zwiebel are listed as inventors in pending patent application by Vanderbilt University and University of California Riverside.

Cell Reports, published by Cell Press, is a weekly open-access journal that publishes high-quality papers across the entire life sciences spectrum. The journal features reports, articles, and resources that provide new biological insights, are thought-provoking, and/or are examples of cutting-edge research. For more information, please visit http://www.cell.com/cell-reports. To receive media alerts for Cell Reports or other Cell Press journals, contactpress@cell.com.

When it comes to body odor, ants are connoisseurs 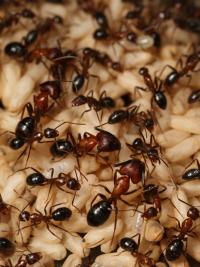