The impacts of predator loss and climate change are combining to devastate living reefs that have defined Alaskan kelp forests for centuries, according to new research published in Science.

"We discovered that massive limestone reefs built by algae underpin the Aleutian Islands' kelp forest ecosystem," said Douglas Rasher, a senior research scientist at Bigelow Laboratory for Ocean Sciences and the lead author of the study. "However, these long-lived reefs are now disappearing before our eyes, and we're looking at a collapse likely on the order of decades rather than centuries."

The coral-like reefs, built by the red alga Clathromorphum nereostratum, are being ground down by sea urchins. Sea urchins exploded in number after their predator, the Aleutian sea otter, became functionally extinct in the 1990's. Without the urchins' natural predator to keep them in check, urchins have transformed the seascape - first by mowing down the dense kelp forests, and now by turning their attention to the coralline algae that form the reef.

Clathromorphum produces a limestone skeleton that protects the organism from grazers and, over hundreds of years, forms a complex reef that nurtures a rich diversity of sea life. With kelp gone from the menu, urchins are now boring through the alga's tough protective layer to eat the alga - a process that has become much easier due to climate change.

"Ocean warming and acidification are making it difficult for calcifying organisms to produce their shells, or in this case, the alga's protective skeleton," said Rasher, who led the international team of researchers that included coauthors Jim Estes from UC Santa Cruz and Bob Steneck from University of Maine. "This critical species has now become highly vulnerable to urchin grazing - right as urchin abundance is peaking. It's a devasting combination."

Based on their size and age, it's clear that the massive reefs built by Clathromorphum have long played a vital role in the Aleutian Islands' marine ecosystem, including during past urchin booms. Sea otters were hunted to near extinction during the maritime fur trade of the 1700s and 1800s. When urchin populations spiked in response, the reefs held their ground.

"During the fur trade, Clathromorphum persisted through centuries where urchins presumably abounded," Rasher said. "However, the situation has drastically changed this time around. Our research shows that sea urchin grazing has become much more lethal in recent years due to the emergent effects of climate change."

As the alga adds to its calcified skeleton each year, it creates bands of annual growth - like rings in a tree. These bands archive whether sea urchin grazing events occurred in each year. By examining polished samples under a microscope, the research team found that they suddenly had a way to look back into the ecosystem's past. This insight allowed them to determine that urchin grazing had waned and waxed over time with the past recovery and recent collapse of sea otter populations. Alarmingly, it also revealed that grazing rates have accelerated in recent time in association with rising seawater temperatures.

The researchers also brought live Clathromorphum and urchins back to the laboratory and put them in controlled environments that replicated preindustrial and current seawater conditions, as well as those expected at the end of the century. After three months, the algae and urchins were paired together to assess how the lethality of urchin grazing changed as a function of seawater temperature and acidity. The scientists found that lethal grazing under current conditions was about 35 to 60 percent greater than in preindustrial conditions. The rates grew even more under future conditions - by about an additional 20 to 40 percent. The results of the experiment confirmed that climate change has recently allowed urchins to breach the alga's defenses, pushing this system beyond a critical tipping point.

"It's well documented that humans are changing Earth's ecosystems by altering the climate and by removing large predators, but scientists rarely study those processes together," Rasher said. "If we had only studied the effects of climate change on Clathromorphum in the laboratory, we would have arrived at very different conclusions about the vulnerability and future of this species. Our study shows that we must view climate change through an ecological lens, or we're likely to face many surprises in the coming years."

The discovery of this interplay between predators and climate change does offer some hope - providing multiple ways to address the accelerating reef destruction. Reducing greenhouse gases is one of humanity's most urgent needs, but it is a global effort that requires international cooperation and coordination. Restoring sea otters, however, is a regional effort that has the ability to mitigate reef erosion by urchins, and pull the ecosystem back from its tipping point.

"This is exciting because it suggests that resource managers have opportunities to manage large predators in ways that can help slow the rate with which climate change is deteriorating our natural ecosystems," Rasher said. "In the case of Aleutian kelp forests, restoring sea otter populations would bring many ecological benefits, and would also buy us time to get our act together on curbing carbon emissions, before this foundational reef builder is lost."

The research was funded by the US National Science Foundation (PLR-1316141 and MGG-1459706) and the National Sciences and Engineering Council of Canada (Discovery Grants).

Bigelow Laboratory for Ocean Sciences is an independent, nonprofit research institute located in East Boothbay, Maine. From the Arctic to the Antarctic, Bigelow Laboratory scientists use innovative approaches to study the foundation of global ocean health and unlock its potential to improve the future for all life on the planet. Learn more at bigelow.org, and join the conversation on Facebook, Instagram, and Twitter.

Loss of sea otters accelerating the effects of climate change 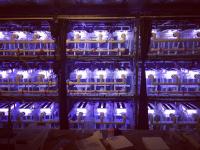