By sequencing the genome of the yellow-banded bumblebee, York University researchers have found that inbreeding and disease are likely culprits in their rapid decline in North America.

This is believed to be the first time the genome of an at-risk bumblebee has been sequenced and it allows researchers to take a deeper look into the potential reason for their diminishing numbers. What they found surprised them.

"The yellow-banded bumblebee has been declining throughout much of its range in North America, but we don't know why," says York U Associate Professor Amro Zayed, Research Chair in Genomics in the Faculty of Science. "We sequenced their genome so we can search for any clues of why the bumblebee is declining."

Those clues show that bumblebees are inbreeding, and their immune genes are under selection, which points to disease as a likely cause of the stress.

The yellow-banded bumblebee, Bombus terricola, is listed as vulnerable to extinction globally on the recently updated International Union for Conservation of Nature and Natural Resources Red List of Threatened Species. It is part of a subgenus of bumblebees that includes the rusty-patched bumblebee, which is almost extinct now in Canada. The last sighting of one was in 2009.

"This particular bumblebee is down to about 10 per cent of its former numbers. It used to be one of our most common bumblebees in Southern Ontario. When we created the genome, we looked for signs of inbreeding and unfortunately that's what we found. Bumblebees in Southern Ontario and mid-northern Quebec are becoming more inbred," says York U biology researcher Clement Kent, who led the research.

With inbred bees, males can become infertile and when they mate with the queen, they often won't produce any offspring at all or if the male genes are too closely related to the queen, they may produce sterile males instead of worker bees. "That means she may only have half as many workers to build the colony then needed," says Kent.

But the other piece of the puzzle is disease. "If it is disease knocking down these bees, we should see signs of strong selection on genes that are involved with the immune system of bees, and that in fact is what we found," says Kent.

Out of the 46 bumblebee species in North America, one in four are at risk of extinction and that includes the yellow-banded, the western and the rusty-patched bumblebees.

"What this research does is give us a tool that can show us that pathogen spillover or disease outbreak could explain why these populations declined in Southern Ontario and Quebec. It's useful because the rusty-patched bumblebee is thought to have declined by a disease outbreak, but I've only found two in Canada since 2005. Something like this gives us another way of testing why these bees are declining when it's really hard to locate them, let alone sample them in the wild," says York U Assistant Professor aSheila Colla of the Faculty of Environmental Studies (FES).

"It's like detective work to find out why native bumblebees are declining. For this research to find things at the genetic level that we've been looking at at the landscape level, is surprising, and adds support as another line of evidence."

The research is published in the journal Frontiers in Genetics. It was funded by Wildlife Preservation Canada, along with a Natural Sciences and Engineering Research Council of Canada discovery grant.

Genome sequencing finds disease likely cause of rapid decline of bumblebees, York U

Inbreeding and disease could be cause of declines of bumblebees, York U

York University is known for championing new ways of thinking that drive teaching and research excellence. Our students receive the education they need to create big ideas that make an impact on the world. Meaningful and sometimes unexpected careers result from cross-discipline programming, innovative course design and diverse experiential learning opportunities. York students and graduates push limits, achieve goals and find solutions to the world's most pressing social challenges, empowered by a strong community that opens minds. York U is an internationally recognized research university - our 11 faculties and 26 research centres have partnerships with 200+ leading universities worldwide. Located in Toronto, York is the third largest university in Canada, with a strong community of 53,000 students, 7,000 faculty and administrative staff, and more than 295,000 alumni. York U's fully bilingual Glendon campus is home to Southern Ontario's Centre of Excellence for French Language and Bilingual Postsecondary Education.

Inbreeding and disease are factors in decline of yellow-banded bumblebee, York U study 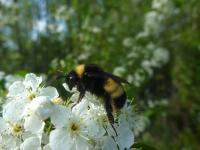