A tiny single-celled organism that plays a key role in the carbon cycle of cold-water oceans may be a lot smarter than scientists had suspected.

In a paper published June 11 in the online version of Proceedings of the National Academy of Sciences, researchers report the first evidence that a common species of saltwater algae – also known as phytoplankton – can change form to protect itself against attack by predators that have very different feeding habits. To boost its survival chances, Phaeocystis globosa will enhance or suppress the formation of colonies based on whether nearby grazers prefer eating large or small particles.

“Based on chemical signals from attacked neighbors, Phaeocystis globosa enhances colony formation if that’s the best thing to do for survival, or it suppresses the formation of colonies in favor of growing as small solitary cells if that’s the best thing to do,” said Mark E. Hay, Teasley Professor of Biology at the Georgia Institute of Technology. “These changes in form made nearly a 100-fold difference in the alga’s susceptibility to being eaten. It’s certainly surprising that a single-celled organism can chemically sense the presence of nearby consumers, identify those consumers and change in opposing ways depending on which consumers are present.”

The behavior could have implications for global climate change because Phaeocystis blooms play a key role in the carbon cycle of cold oceans, accounting for up to 85 percent of local productivity during some time periods. This complex defensive behavior also shows how environmental factors can affect even simple organisms, Hay noted.

Conducted largely at Georgia Tech’s marine lab in Savannah, Ga., the research was sponsored by the U.S. National Science Foundation and the U.S. Environmental Protection Agency.

Lead author Jeremy D. Long, along with collaborators Gabriella W. Smalley, Todd Barsby, Jon T. Anderson and Mark Hay found that’s just what Phaeocystis does. Chemicals that signaled attacks from copepods suppressed the formation of colonies by 60 to 90 percent, while signals from ciliates enhanced colony formation by more than 25 percent.

The transformations took place over periods of three to six days, and the overall size difference could be dramatic. “When one of these cells changes to the biggest colony form, although it takes a while, it’s like changing from a mosquito to 76 blue whales or 3,000 bull elephants,” Hay explained. “That’s a pretty dramatic difference.”

Defensive responses are often seen in higher plants, but this is believed to be the first report of such a complex and species-specific response in marine phytoplankton. Hay suspects scientists may find other examples of complex defensive strategies when they look more closely at other single-celled organisms.

The response of Phaeocystis could be important to scientists studying climate change because the predator that ultimately consumes the phytoplankton determines the fate of the carbon it contains. If eaten by copepods, for example, the carbon becomes part of fecal packages that sink into the deep ocean where a portion of that carbon is sequestered – thereby reducing atmospheric carbon dioxide, a leading greenhouse gas. If consumed by smaller creatures like ciliates, less of the carbon sinks to the deep sea and more remains in the surface waters.

“This could alter the flow of energy and nutrients from deep to shallow, depending on what might be trying to eat it, and how the organism responds to the chemical signals of what’s attacking it,” Hay said.

Experimentally, the researchers attempted to separate the chemical signals from the actual predators. They grew Phaeocystis in the presence of either ciliates or copepods. They then filtered out both the phytoplankton and predators, leaving only water containing the chemical signals of attack.

Water samples containing signals from the two predators were then separately introduced into Phaeocystis cultures that had not been attacked. The scientists then studied how the different chemical signals affected the percentage of Phaeocystis living in colonies or as solitary cells. Finally, they examined whether this response affected how much the predators ate to determine if the change conferred a survival advantage.

“We found that these organisms were making the right choice,” Hay said. “They were shifting to the shape that made them largely immune to whichever predator was attacking, and this shift suppressed either the feeding or growth and reproduction of the consumer to which they were responding.”

The role of this phytoplankton has been controversial in the scientific community, with some arguing that Phaeocystis makes a good food source for higher creatures in the cold oceans, while others contend its food role is small. While this paper won’t resolve the dispute, Hay believes it shows that both points of view could be correct – depending on which form the organism has taken.

“It depends on the environmental context, which we are appreciating more and more in ecology and in biomedical research,” he added. “Some of these differences are small, but they can have a large effect.”

Marine phytoplankton changes form to protect itself from different predators

Journal
Proceedings of the National Academy of Sciences
Funder
, US Environmental Protection Agency 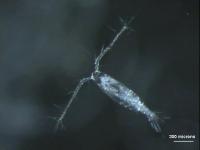