New research on the reproductive habits of zebrafish offers an explanation as to why some animals' bodies repair tissues. The research team previously noticed that male zebrafish regenerate their pectoral fins poorly, as compared to females. Their latest findings, publishing in the October 14 issue of the Cell Press journal Developmental Cell, reveal the basis for this sex-specific regenerative deficiency: structures that are used to improve reproductive success. The scenario represents an example of the tradeoffs between reproduction and survival.

Led by first author Junsu Kang, the scientists identified anatomical structures that male fish use during mating that produce a signal that impedes regeneration of the pectoral fins after injury. As such, fish appear to trade an ancient ability to regenerate tissue easily for a new-found way of enhancing reproductive success. This valuable information could help scientists begin to explain why humans are less able to regenerate tissue and could also be used to improve the body's tissue regenerative capacity.

"We discovered that male zebrafish have a very important set of structures on their pectoral fins that they use for breeding and that these structures secrete a potent molecular inhibitor of a key signaling pathway to aid their cycles of regular replacement," explains senior author Kenneth Poss of Duke University Medical Center.

Poss notes that growing attention in the field of tissue regeneration is being paid to factors that block signaling pathways. "Our results indicate that the presence or restriction of a pathway inhibitor is critical to whether regeneration occurs normally, providing new fuel for ideas of how to promote regeneration after injury in humans." 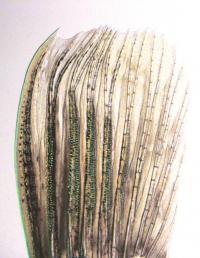