Many long-lived birds, such as swans, albatrosses or indeed, puffins, are known for their long-lived monogamous, 'soulmate' pairings. Scientists have long understood that in these species, reproductive performance is influenced by pair bond strength and longevity, with long-established pairs usually better at rearing offspring. However, in species like puffins which have to migrate to distant wintering grounds during the non-breeding season, very little is known about how mates maintain their pair-bond and behave. Do they keep in contact to maintain their relationship? Or do they go their own way and abandon their mate until the following spring?

The new study which features in the April 7th 2017 edition of Marine Ecology Progress Series, focused on whether puffin pairs stayed in contact during the winter months or instead headed off and migrated independently, prioritising their individual health and wellbeing, and whether this had any effect on the pairs' subsequent breeding success.

Over the course of six years, the team from Oxford's Department of Zoology, in collaboration with the London Institute of Zoology, used miniature tracking devices called geolocators to track the migratory movements and behaviour of 12 pairs of Atlantic Puffins, breeding on Skomer Island, Pembrokeshire. They assessed if and how much pairs' migratory strategies were related to their future breeding performance and fitness.

While pair members migrated separately, their routes were notably similar during the first part of the winter. Partners would then follow separate paths at the later end of the season, but synchronised their timings of return to the colony in spring.

A key finding of the study is that pairs which followed more similar migration routes bred earlier and more successfully the following spring, showing that there is a clear benefit for puffins to migrate close to their mates. This proximity may make it easier for pairs to synchronise their return to the colony in spring.

The findings also reveal that while migrating close to its partner is key to a puffin's reproductive success, there are other factors at play. Female puffins were found to forage more than males, proving critical to their breeding success the following season. Female puffins that foraged more over winter were able to lay eggs earlier and rear pufflings more successfully, most likely because they were in a better pre-breeding condition.

Dr Annette Fayet, a Junior Research Fellow of Queen's College, Oxford and of the Department of Zoology at Oxford University, who is lead author of the study, said: 'While migrating close to one's partner leads to more successful breeding in puffins, female winter foraging effort seems to be even more critical to ensure high reproductive success. A likely explanation for this finding is that female puffins which spend more time fuelling up over winter return to the colony in better condition and are able to lay higher quality eggs, rearing stronger chicks. Overall it seems that prioritising individual condition is more important for seabirds' breeding success than maintaining contact with their partner outside of the breeding season. However, following similar migration routes to one another may help synchronise returns to the breeding colony, which is known to be important for pair bond and breeding success in many migratory birds.'

Moving forward the team hopes to build on the findings and recent technological developments, investigating the movements and behaviour of seabirds when they are at sea. Dr Fayet said: 'At the end of the breeding season puffins disappear at sea for over eight months before returning the following spring, and scientists have long had questions about where they go during that time. However, until recently tracking devices were too big to use on small birds like puffins. The recent miniaturisation of tracking technology mean we can now study the at-sea movements of puffins and other small migratory seabirds remotely over months and even years. Complex analytical techniques like machine learning can also be used to identify behaviours in tracking data, allowing us to know not only where birds go, but also what they do at sea (e.g. flying, foraging). This will help us study seabirds' at-sea ecology and behaviour, which is currently poorly understood, but the results will also be invaluable for the conservation of seabirds, which are currently threatened by ocean pollution and overfishing, making them the most endangered group of birds on the planet. This includes puffins, which have been dramatically declining in the last few decades. ' 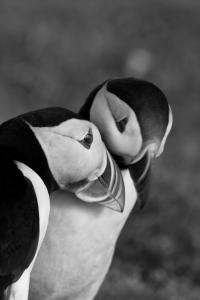 Puffins Are Known For Their Long-Lived, Monogamous, Soulmate Pairings