Native bees that boost food crops are in decline but changing fire management policies could help them.

UC Riverside entomologist Lauren Ponisio explains that native bees are increasingly important to food growers. They pollinate crops on the fringes of a farm and could potentially also be used for agricultural purposes.

"The non-native honeybees currently used for crops are having problems, and we're in trouble if native bees can't replace or supplement them on our farms," Ponisio said. "Relying on one species of bee to pollinate all our crops is unsustainable."

Ponisio led a study to be published this month in the journal Ecology and Evolution that examined environmental factors affecting the health of native bees. There are thousands of bee species that live in the wild, many of which are found in California.

Ponisio found that these native bees are better able to survive harsh climate events, like drought, in areas where naturally occurring fires are allowed to burn.

Small fires consume dry brush that would otherwise fuel megafires, like 2018's deadly Camp Fire, which occur with increasing frequency in California. In addition to eliminating fuel for megafires, smaller mixed-severity burns also trigger positive changes in the environment. They remove unhealthy and dead trees, allow sunlight to reach a forest floor, and create a better environment for native plants and their pollinators to thrive.

The team sampled bees in 2013 and 2014, a two-year period of severe drought in California. In 2014, there was no summer rainfall, there was little snowpack in the Sierra Nevada mountains, and flowers were not blooming.

A majority of the 164 bee and 71 flowering plant species Ponisio sampled during the study period declined. However, where natural fires had created a diversity of habitats, bees were able to find alternative flower species to visit, and therefore their populations did not decline as much as when the same species were in areas without a diversity of natural fires. There was only a single species of bee that not only survived but increased as a result of the drought -- the European honeybee.

"The honeybee is a hyper generalist," said Ponisio. "There's not a plant they won't try out, which is why they're great for agriculture, and are so successful when they invade wild ecosystems."

Boosting native plants would provide ample food resources both for native and the non-native European honeybees that spread into wild environments. This way, all of them could feed and not compete for pollen resources. One of the best and most immediate ways to encourage this scenario would be to reconsider fire management policies.

"Smokey the Bear was wrong," Ponisio said. "We actually don't need to prevent forest fires when they are not endangering people." 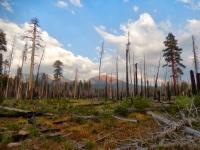