Genome analysis can provide information on genes and their location on a strand of DNA, but such analysis reveals little about their spatial location in relation to one another within chromosomes -- the highly complex, three-dimensional structures that hold genetic information.

Chromosomes resemble a fuzzy "X" in microscopy images and can carry thousands of genes. They are formed when DNA winds around proteins -- called histones -- which are further folded into complexes called chromatin, which make up individual chromosomes.

Knowing which genes are located in spatial proximity within the chromatin is important because genes that are near each other generally work together.

Now, researchers at the University of Illinois Chicago report on a computational technique that uses heat map data to reverse engineer highly detailed models of chromosomes. Through this work, the researchers have uncovered new information about the close spatial relationships that chromatin folding creates between genes that can be highly distant from one another along DNA strands.

Their findings are published in the journal Nature Communications.

"Folding of the chromatin brings genes that are far away from each other into close proximity. If we know that certain groups of genes are spatial neighbors because of this folding, that tells us they most likely work together to drive processes such as the development of immunity, or even more fundamental processes like development or cell differentiation," said Jie Liang, UIC Richard and Loan Hill Professor of Bioengineering and a corresponding author on the paper. "This is important for better understanding these processes or development of new therapeutics to prevent or treat cancer and other diseases."

Liang and his colleagues developed a way to reverse engineer the complex structures of individual chromosomes using information from a process called Hi-C. Hi-C generates heat maps based on probabilities reflecting which genes are most likely to be spatially close to one another. These heat maps can provide approximate three-dimensional information on how chromosomes are organized, but because they are based on genetic material from multiple cells, the maps represent average likelihoods of proximity between genes, not exact locations.

Liang and colleagues looked at Hi-C heat maps of chromosomes from cells of fruit fly embryos, which have only eight chromosomes. They used these heat maps together with new advanced computational methods to generate extremely detailed three-dimensional maps of the chromosomes of individual cells.

"For the first time, we are able to produce single-cell models that accurately represent genetic spatial relationships within chromosomes," Liang said. "With these models, we can uncover rich biological patterns and answer basic biological questions about three-dimensional structural changes chromosomes undergo to cause stem cells to develop into different tissues, and how malfunctions in these processes lead to diseases such as cancer."

Jie Liang and Alan Perez-Rathke, University of Illinois at Chicago 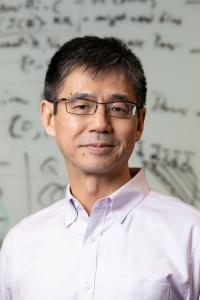