CHAMPAIGN, Ill. — Many wonder why bullies bully, but a new study looks at the other side of the equation: How do children respond to bullying and why? The answer, researchers say, may lead to more effective interventions to reduce the negative consequences – and perhaps even the frequency – of bullying.

The study appears in the journal Child Development.

"The main question we were interested in is how do children go about selecting strategies for dealing with harassment from their peers?" said University of Illinois psychology professor Karen Rudolph, who led the study. "And what we focused on was an understanding of the goals that kids develop in their social relationships."

Consciously or not, children tend to adopt one of three approaches, she said.

Others are most interested in "demonstrating their competence," she said. They may try to demonstrate their competence by enhancing their status or seeking approval from their peers. "These are kids who say: 'I want to be cool. I want lots of kids to like me. I want to hang out with the popular kids.' "

A series of questionnaires administered to 373 second-graders and their teachers revealed how many of the children had been harassed (half of the children reported being the target of teasing, gossip, physical intimidation or worse at least a little bit of the time), how they responded to harassment and how each child generally thought about his or her peer relationships. The researchers then followed the children to determine if, and how, their social goals influenced how they dealt with harassment in the third grade.

They found, as they expected, that children who were most interested in developing relationships "had more positive perceptions of themselves and were more likely to say that they would cooperate and work to reduce conflict with other kids," Rudolph said. When other kids harassed them, these children were "more likely to engage in proactive strategies to solve the problem," she said. This might involve asking a teacher for advice, or getting emotional support. Students with these goals also were less likely to engage in other impulsive responses to harassment, Rudolph said.

Children who wanted to be perceived as "cool" or competent "were less likely to use those kinds of thoughtful, careful strategies" when dealing with harassment, Rudolph said. "And they were more likely to retaliate." These children also had more negative perceptions of their peers, Rudolph said.

Those who wanted to avoid negative judgments were less likely to retaliate against their peers. "But they were also more passive. They just ignored what happened," she said. This approach might be useful in some circumstances, particularly for boys who tend to be more physically aggressive and more likely to retaliate than girls, Rudolph said. But passive responses also may increase a bully's willingness to "up the ante," she said.

The researchers also discovered that children who were more bullied in the second grade "were more likely to freeze up and try to escape from the situation, or to ruminate about it, keep going over it in their mind, but not actually do something active about it," Rudolph said. They also "were less likely to show problem-solving type strategies" in the third grade, she said.

Understanding children's social goals may lead to better interventions to change the dynamic between a bully and his or her targets, Rudolph said.

"Just telling kids, 'this is what you should do' might not change their behaviors because their goals might be different from our goals," she said. "So I think understanding where the kid's coming from and why they're actually acting the way they do is going to be crucial for changing their behavior."

The National Institute of Mental Health and the University of Illinois Research Board supported this work.

The paper, "Developing Relationships, Being Cool, and Not Looking Like a Loser: Social Goal Orientation Predicts Children's Responses to Peer Aggression," is available from the U. of I. News Bureau. 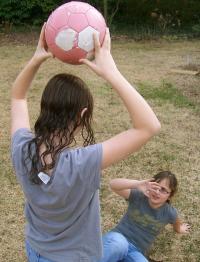