Because many materials are handled in industrial applications as suspensions, engineers need to understand how to predict their flow properties. However, they have been hard-pressed to understand DST and calculate when it will occur during processing. Since concentrated suspensions are found in everything from consumer products to cement, a range of industries stand to find better ways to manage suspensions.

Research associates Ryohei Seto and Romain Mari and chemical engineering Professors Jeffrey Morris and Morton Denn set out to develop a model that would predict how resistance changes in relation to stirring speed. Their findings were reported in "Physical Review Letters" in November.

The model modifies the classical fluid mechanics approach to suspension behavior, in which liquid lubrication keeps particles from contact, to permit contact and to include forces resulting from friction as particles move past one another.

As friction increases two or more particles can act like a single entity with regard to the surrounding fluid. When concentrations of particles and the shear rate reach sufficient levels, the particles form temporary chains that can fill space. This causes jamming, which can make flow difficult or even impossible.

Using the model, the team was "able to accurately reproduce experimental observations of the steep viscosity versus shear rate curves and their evolution with packing friction, both of which are first for numerical simulations," Dr. Eric Brown, Yale University assistant professor of mechanical engineering and materials science, wrote in a commentary published in "Physics."

Future investigations will address moving beyond a simulation "that follows the mechanics of a finite number of particles in a cube to predicting the flow of concentrated suspensions in arbitrary geometries," Professor Denn noted. "A long-term goal is to be able to develop a 'continuum' description of concentrated suspensions in which the behavior is averaged over large numbers of particles."

About The City College of New York

Since 1847, The City College of New York has provided low-cost, high-quality education for New Yorkers in a wide variety of disciplines. More than 16,000 students pursue undergraduate and graduate degrees in: the College of Liberal Arts and Sciences; the Bernard and Anne Spitzer School of Architecture; the School of Education; the Grove School of Engineering; the Sophie Davis School of Biomedical Education, and the Colin Powell School for Civic and Global Leadership. U.S. News, Princeton Review and Forbes all rank City College among the best colleges and universities in the United States. 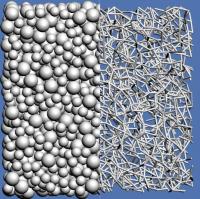