(SALT LAKE CITY) - Examination of DNA from 21 primate species - from squirrel monkeys to humans - exposes an evolutionary war against infectious bacteria over iron that circulates in the host's bloodstream. Supported by experimental evidence, these findings, published in Science on Dec. 12, demonstrate the vital importance of an increasingly appreciated defensive strategy called nutritional immunity.

"We've known about nutritional immunity for 40 years," says Matthew Barber, Ph.D., first author and postdoctoral fellow in human genetics at the University of Utah. "What this study shows us is that over the last 40 million years of primate evolution, this battle for iron between bacteria and primates has been a determining factor in our survival as a species." The study also models an approach for uncovering reservoirs of genetic resistance to bacterial infections, knowledge that could be used to confront emerging diseases.

Following infection, the familiar sneezing, runny nose, and inflammation are all part of the immune system's attempts to rid the body of hostile invaders. Lesser known is a separate defense against invasive microbes, called nutritional immunity, that quietly takes place under our skin. This defense mechanism starves infectious bacteria by hiding circulating iron, an essential nutrient it needs for survival. The protein that transports iron in the blood, transferrin, tucks the trace metal safely out of reach.

Clever as it sounds, the ploy is not enough to keep invaders at bay. Several bacterial pathogens - including those that cause meningitis, gonorrhea, and sepsis - have developed a weapon, transferrin binding protein (TbpA), that latches onto transferrin and steal its iron. Though scientists have known of the offensive strategy, they failed to realize how pivotal the battle over iron has been in the conflict between host and pathogen.

"Interactions between host and pathogen are transient and temporary," says senior author Nels Elde, Ph.D., assistant professor of human genetics at the University of Utah. "It took casting a wide net across all of primate genetic diversity to capture the significance."

Up to 25 percent of people in the world's populations have a small alteration in the transferrin gene, which prevents recognition by several infectious bacteria, the most recent sign of this long battle. "Up until this study no one had come up with a functional explanation for why this variation occurs at an appreciable frequency in human populations," says Elde. "We now know that it is a consequence of the pathogens we and our ancestors faced over millions of years."

Understanding the strategies that underlie natural defense mechanisms, including nutritional immunity, could inform new approaches to combatting antibiotic-resistant bacteria and emerging diseases. "By examining the natural conflicts that have played out for millions of years, we can determine what has worked, and apply them in new situations," says Elde. 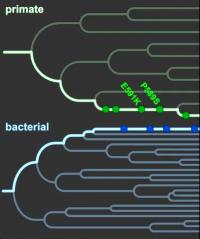 40-Million-Year Battle for Survival Between Primate and Pathogen