For more than 1 million years, independent cavefish populations that are geographically and hydrologically isolated from one another have evolved to include about 29 different populations. Among them, the tiny Mexican tetra, Astyanax mexicanus, which comprises river-dwelling surface fish and multiple independently evolved populations of blind cavefish. Many of the behaviors between these cavefish populations differ, suggesting widespread differences in brain structure and function. Although trait evolution in cavefish has been studied for more than a century, little is known about how their brains differ. Moreover, the differences in brain activity have never been explored.

A groundbreaking study published in Science Advances by neuroscientists at Florida Atlantic University's Charles E. Schmidt College of Science and Harriet L. Wilkes Honors College in collaboration with Bar-Ilan University, Ramat-Gan in Israel, is the first to identify large-scale differences between surface fish and cavefish populations of A. mexicanus, as well as between different populations of cavefish. Researchers extracted 18 anatomical regions across the entire brain and measured changes in neural activity across these regions. Whole-brain atlases generated from this study represent a comparative brain-wide study of intraspecies variation in a vertebrate model and provide a resource for studying the neural basis underlying behavioral evolution.

Results of the study show that hunting behavior induced broad changes in brain activity across all four A. mexicanus populations and likely activates brain regions associated with sensory processing, satiety, and motivation. Sleep-associated activity differed in the rostral zone of the hypothalamus and tegmentum. Alterations in feeding-associated circuitry identified in the study occurred early in development suggesting that evolutionary changes are unique among different cavefish populations. Analyses of brain region volume and neural circuits associated with behavioral regulation identified convergence on hindbrain and hypothalamic expansion, as well as changes in neurotransmitter systems, including elevated numbers of catecholamine and hypocretin/orexin neurons in cavefish populations.

To characterize differences in brain anatomy between populations, researchers quantified the size of individual brain regions within each A. mexicanus population. To determine whether identifiable brain regions were different in size between populations, they identified select regions using the standard brains they developed as a reference map, along with a brain atlas made for adult A. mexicanus. To determine whether there are changes in the size of brain regions that may be associated with evolved behavioral differences, the researchers quantified 13 additional brain regions, including the tectum, cerebellum, pallium, and four regions of the hypothalamus. To localize pERK signal to distinct regions of the brain, they performed registrations to the standard brains they developed.

"These fish have been studied for more than 80 years and there is widespread appreciation for how much they can tell us about how different behaviors evolve. Now, for the first time, we can look inside their brains with millimeter resolution," said Keene. "We can start to understand how the individual neurons and brain regions that drive complex behaviors, including sleep and feeding have evolved. This work has broad implications for our understanding of how brains evolve in many different animal models and we hope that it will be widely used by the scientific community."

This ambitious project was a collaborative effort involving stellar graduate students at FAU and was spearheaded by James Jaggard, Ph.D., first author, former FAU research assistant, and a National Institutes of Health (NIH)-funded post-doctoral researcher currently working in the laboratory of Philippe Mourrain, Ph.D. at Stanford University. It brought together three cavefish laboratories at FAU as well as expertise in zebrafish brain function from the research team within The Goodman Faculty of Lifesciences, Bar-Ilan University, under the direction of co-author and associate professor Lior Appelbaum, Ph.D. 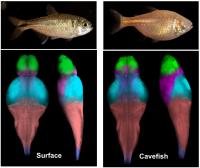