Engineers from Carnegie Mellon University's Scott Institute for Energy Innovation have compiled carbon emissions for the U.S. electric power sector for the second quarter (Q2) of 2019 as part of the CMU Power Sector Carbon Index. The index tracks carbon emissions and electricity generation over time and by energy source. Compared to Q2 of 2018, total U.S. power generation fell by 4% in Q2 of 2019, and the carbon intensity of the sector, measured in pounds of CO2 emissions per megawatt-hour, dropped by 9%.

"The U.S. electricity sector is continuing to get cleaner, and both carbon intensity and overall emissions are dropping," said Costa Samaras assistant professor of Civil and Environmental Engineering and Power Sector Carbon Index co-director.

Coal generation in 2019 Q2 is down 19% compared to just a year ago. After being the dominant source of power production in the U.S. for most of the electric age, coal has been on a steady decline for the past decade. In 2016, natural gas replaced coal as the largest source of electricity, a trend which has continued since. Burning natural gas produces only about half of the direct CO2 emissions that coal does, per unit of energy generated. In 2019 Q2, power generation from coal provided 21% of the nation's electricity, while natural gas provided 36%.

"We're in the middle of an energy transition right now, and the biggest part of that story in the U.S. is how swiftly coal has been declining over the past decade," said Samaras. "The decline of coal can be attributed to the rise of natural gas, the continued improvement of renewables, and energy efficiency efforts."

Renewables saw considerable growth over the past year. Compared to 2018 Q2, generation from solar increased 10% and generation from wind increased by 7%. "Wind and solar power are getting more and more competitive in electricity markets," said Samaras, pointing to the falling production costs as a significant driver of renewable energy. The large majority of renewable generation currently comes from utility-scale projects, as opposed to distributed generation like residential roof-top solar or small wind turbines. Together, wind and solar accounted for 11% of U.S. power generation in 2019 Q2. Hydropower generation provided 8%.

The Power Sector Carbon Index, supported by Mitsubishi Hitachi Power Systems, was created to give policy makers, academics, industries, think-tanks, and the public up-to-date information on trends in the carbon intensity of the U.S. power sector. Though it relies on publicly available data, the Power Sector Index compiles information from disparate datasets and standardizes the calculation of carbon intensity, providing a much-needed service for anyone wanting to track the performance of the sector.

Compared to 2005, a year commonly used to benchmark progress in reducing emissions, the carbon intensity of the U.S. power sector is down more than 38% in 2019 Q2. Much of this progress comes simply from displacing coal with natural gas, though high-efficiency natural gas plants do account for a small portion of this reduction. Renewable sources, which Samaras expects will continue to add capacity to the power sector, account for most of the rest of this reduction in carbon intensity.

In 2017, for the first time in decades, transportation supplanted power generation as the economic sector with the highest greenhouse gas emissions. Tracking carbon in the power sector, according to Samaras, remains the fundamental barometer of progress in decarbonization due to the promise of electrification reducing emissions from other sectors, like transportation (with electric vehicles), buildings (with electric space heating), and some industrial activities. The Power Sector Carbon Index will continue to track these trends in a useful, easy to understand, and reliable way for anyone interested in U.S. carbon emissions.

Carbon intensity of power sector down in 2019 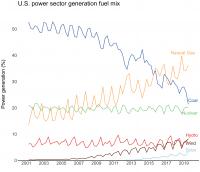