The eleventh edition of the Art of Neuroscience competition is won by Yas Crawford, an associate of the Royal Photographic Society and independent artist. With her artwork 'Cognition IX', Crawford looks at neurological interoception in Myalgic Encephalomyelitis (M.E) patients. The winner was chosen by a jury out of 293 entries from over 20 countries.

The 'Cognition IX' artwork belongs to a series of images entitled 'The 8th Sense' and was created by using digital and analogue photography, video and camera-less experiments. Crawford: "interoception is considered to be the 8th Sense, a link between bodily sensation and emotional reactions. In recent decades the idea of how the body processes information and bodily sensations has created the idea of the experienced phenomenologically lived body as the basis of consciousness".

The jury praised the perfectly composed image, full of movement, dynamic and with a lot of flow. One jury member said it clearly "represents the explosion that takes place inside our heads".

Sarshar Dorosti, a student at the Tehran University of Art in Iran, receives an honorable mention for the video 'Fractal Brain', in which the incident of non-symmetric natural phenomena and a mathematical set can appearance the chaos in behavior. The jury liked the attempt to visualize AI's role on a western-centered perception of emotions by means of animation.

Adrienne Lee, an independent artist from the US, was praised for her submission 'Change of Heart'. She used the malleability of steel to speak to the recurrence of movement in her personal history via Purkinje cells of the cerebellum. The artist also incorporated Hangul, the Korean alphabet, as a tangible gesture linked to her ethnicity. The jury was enthusiastic about the originality and praises its playfulness.

'Brainwave Project, helping patients with disorders of consciousness' by Qi Chen a teacher at Wuhan Textile University, impressed the jury by its personal story. The Brainwave Project is a functional artwork in which Chen applies a scientific, visual and personalized auditory stimulation solution to help a specific fraction of people in a micro-conscious state that can be awakened to carry out effective daily rehabilitation training. The jury considered the submission: "a well-intentioned documentary about a collaborative art process involving imaging technology and neuroscience to produce visuals by patients who are not considered to be conscious according to medical standards".

Guihan Lu was awarded for the submission 'Self evolution', which is a projection mapping installation including a mind wave "mobile" and "processor". In this project, the artist regards "Self" as a species, which can evolve spontaneously with machine learning fed with brainwave signals of the audience. The idea was inspired by a cartographer, Abraham Ortelius, who published the first modern uniform Atlas in 1570, naming "The Theater of the World".

Art of Neuroscience started in 2011 at the Netherlands Institute for Neuroscience as a competition for inspiring and provocative imagery from neuroscience labs. The goal has been to make the research from neuroscience labs more tangible, but also aims for scientists to evaluate their own work from a different perspective. In previous editions it has welcomed artists to also submit work inspired by the brain to stimulate the cross-over between neuroscience and art.

More submissions can be found on the website of the Art of Neuroscience.

Funder
Netherlands Institute for Neuroscience, Royal Academy of Art and Sciences the Netherlands 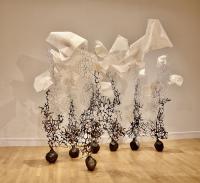