Optical barcodes enable detection and tracking via unique spectral fingerprints. They've been widely applied in areas ranging from multiplexed bioassays and cell tagging to anticounterfeiting and security. Yu-Cheng Chen of the Bio+Intelligent Photonics Laboratory at Nanyang Technological University notes that the concept of optical barcodes typically refers to a fixed spectral pattern corresponding to a single target.

"Optical barcodes have lacked the capability to characterize dynamic changes in response to analytes through time," says Chen. Thanks to Chen's research, that's about to change.

Chen's group recently developed bioresponsive dynamic barcodes, introducing the concept of resonance energy transfer at the interface of the microcavity. As reported in Advanced Photonics, the team demonstrated the barcode experimentally to detect molecules in a droplet. The radiative energy from a single microdroplet is transferred to binding biomolecules, converting dynamic biomolecular information into more than trillions of distinctive photonic barcodes.

The system is based on a whispering-gallery mode resonator (WGMR). The majority of WGMRs are classified as passive. As such, they require evanescent wave coupling and operate based on mode changes induced by perturbations. "In contrast," explains Chen, "active resonators that utilize the analyte as a gain medium can support free-space excitation and collection to acquire more biological information from emission signals."

"In the presence of cavity-enhanced mechanisms, efficient energy transfer and coupling between donors and acceptors may lead to enhanced light-matter interactions and signal-to-noise ratio," says Chen.

The developed system takes advantage of an effect whereby the high concentration of dye (donor) inside the microdroplet triggers a cavity-enhanced energy transfer to excite the molecules (acceptor) attached to the cavity interface.

"When biomolecules bind to the cavity interface, the number of binding molecules alters the amount of energy transfer, resulting in distinctive modulated fluorescence emission peaks," says Chen. Dynamic spectral barcoding was achieved by a significant improvement in the signal-to-noise ratio upon binding to target molecules.

According to the authors, this biomolecular encoding system illuminates a beacon for real-time intermolecular interaction and can greatly increase the complexity of an encoding system. They believe the concept can be widely applied in many biosensing applications and optical encryption. 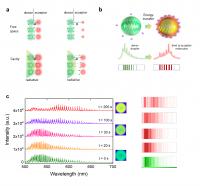