In late February, CBS News Denver reported that mountain lion sightings were on the rise in Colorado's high country. Lion attacks on people in the state and around the world are rare, but the story referenced an attack on a 5-year-old boy in 2016 by a mountain lion near Aspen.

Wildlife biologists around the world studying these big cats have had difficulty explaining why these attacks occur, even after tracking the predators with GPS collars. A study from Colorado State University and Colorado Parks and Wildlife provides new insight. Researchers found that while the animals are generally fearful of and avoid humans, hunger can dampen that fear.

"These predators, including mountain lions, aren't 'hangry' and seeking out back yards to find food, but there comes a point when a mountain lion is hungry enough that it may use back yards to hunt for food, similar to what takes place in the wild ," said Kevin Blecha, who worked on the research in conjunction with Colorado Parks and Wildlife biologists, while pursuing a graduate degree in ecology from CSU.

Previous studies have shown that big cat predators intentionally avoid people, due to fear. Other research has found that predators prefer to spend their time in prey-rich areas.

"Unfortunately, these two explanations were not lining up in explaining large predator movements in back yards, and even contradicted each other, especially when there could actually be more prey, like deer, available near people's homes," said Blecha.

In this study, researchers analyzed hunting behaviors of mountain lions on the fringes of Denver and Boulder, Colorado, through the sprawling exurbia, and into the jagged wilderness areas along the Continental Divide. The team used bio-monitoring collars with GPS location and acceleration recorders, strapped to the lions, allowing the researchers to document the predators' hunting behaviors.

Data from the GPS collar locations revealed whether the mountain lions were avoiding, attracted to, or ambivalent to houses. GPS tracked the dates and times since the mountain lion last fed on a prey animal, allowing researchers to measure the hunger level that the lions were experiencing while moving about its home range. Animals that had not eaten in more than four to seven days showed little to no avoidance of the higher housing densities.

Blecha and the team found that predators' behavior was connected with having an emptier stomach. While a mountain lion can become hungry at any time of the year, the animals would go longer and longer periods of time between making kills as the winter progressed through late spring, a time of the year when wild prey numbers are lowest. Late spring is also when conflicts between mountain lions and humans may be the highest. Researchers concluded, too, that female mountain lions avoided houses less than male counterparts, which is likely due to females expending more energy during times when they are rearing kittens.

In addition, camera traps recorded whether the animals' prey sources were more likely encountered in the higher housing densities or in more wild, public land areas like national forestlands. These camera traps revealed that deer, raccoons and pets were less likely to be encountered in the wildland areas. Complementing this finding, the collars showed that mountain lions were more successful at finding and killing prey near houses than they were away from these structures.

Blecha said it is likely that prey such as mule deer are safer in sprawling subdivisions and exurbias, given that mountain lions, coyotes, and human hunters usually avoid these urban fringes.

"This study contributes to a growing body of evidence indicating that an animal's energetic state is very important in the decision-making process; animals will make riskier choices when hunger beckons," said Blecha. "This is likely the same for all animals, whether it is mountain lions, rabbits, birds, or even humans."

This is among the first studies to demonstrate a direct relationship between hunger and the decision-making process of a large predator.

Colorado Parks and Wildlife officials said homeowners living in the wildland-urban interface can do their part by recognizing that wild and domestic animals in their backyards are seen as prey to wild predators.

"It is important to keep pets from running loose in these areas without supervision," said Blecha. 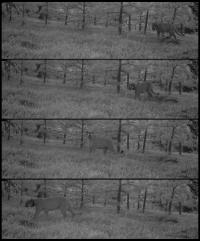