SAN FRANCISCO (June 8, 2015) -- Scientists from the California Academy of Sciences are celebrating World Ocean's Day with a slew of brand new marine discoveries--more than 100 species that are likely new to science. The Philippines is home to the most biologically diverse waters on Earth, and remains the centerpiece of the Academy's multi-year exploration of the Coral Triangle's biological treasures. Over the course of this seven-week undertaking, funded by the National Science Foundation, scientists collected countless marine specimens, including rare and new species of colorful sea slugs, barnacles, and delicate heart urchins--among several others--to be studied in the coming months. Mysterious live animals from dimly-lit, deep-water reefs were also collected for a new exhibit at the Academy's Steinhart Aquarium, expected to open in the summer of 2016.

"The Philippines is jam-packed with diverse and threatened species--it's one of the most astounding regions of biodiversity on Earth," says Terry Gosliner, PhD, Senior Curator of Invertebrate Zoology at the California Academy of Sciences and a Principle Investigator of the expedition. "Despite this richness, the region's biodiversity has been relatively unknown. The species lists and distribution maps that we've created during our years surveying the country's land and sea will help to inform future conservation decisions and ensure that this incredible biodiversity is afforded the best possible chance of survival."

The Academy's 2015 expedition to the Philippines zeroed in on the Verde Island Passage--the veritable treasure trove of marine life nestled between the Philippine islands of Luzon to the north and Mindoro to the south. While previous expeditions (in 2011 and 2014) explored life in the western and northern portions of this narrow passage, the most recent trip took researchers to lesser-known field sites at its southern end.

A carpet of sea slugs

Though the Verde Island Passage houses wildly diverse marine habitats, Gosliner says one spot "shines like a beacon" for sea slug experts on the lookout for new species. This spring, Gosliner and a team of marine invertebrate researchers discovered more than 40 new varieties of nudibranchs--vibrant sea slugs made famous by their poisonous adaptations and importance to biomedical research. Many of these discoveries were made in one notable research site near the Philippine harbor of Puerto Galera.

"This remarkable stretch of coral rubble was carpeted in colorful nudibranchs," says Gosliner, who reported that most slugs he encountered appeared entirely new to science. "It was like an underwater Easter egg hunt. It was one of the most exciting scientific dives of my 50-year career."

Scientists were pleased to find live specimens of a nudibranch--Chelidonura alexisi--initially discovered during the Academy's 2011 expedition. Gosliner based his nearly-published species description on examinations of a deceased specimen, and the live, speckled nudibranchs provided valuable additions to the official species description.

"I was able to submit new details about Chelidonura alexisi--what it looks like, how it lays eggs, and how it varies within its species--literally two weeks before the study came out," says Gosliner. "It's thrilling to return to such an incredibly diverse region year after year. Whether we're finding new species or adding to our understanding of previously known creatures and habitats, these expeditions help us pinpoint how and where to focus protection efforts."

Rich Mooi, PhD, Academy Curator of Invertebrate Zoology and Geology, knows that the Philippines is an "incredibly special place" for sea urchin research, but admitted to a moment of pure astonishment during the recent expedition.

"In 2014, we found the internal skeleton for a lovely new species of heart urchin, about the size of balled-up fist," says Mooi. "I remember saying, 'I haven't the slightest idea what this is!' This spring, we found several more deceased specimens, but lost hope that we'd find a living urchin with all its appendages and spines. I thought we'd never know what this cool beast actually looked like."

As the expedition approached its final weeks, Will Love, Academy Dive Officer, came to the rescue with a live specimen from 70 feet below the ocean's surface off Puerto Galera. Mooi marveled at the heart urchin's pinkish-white spines, "like silk, or fine hairs." While in the process of completing a formal species description, researchers linked the new discovery with a long-lost relative from the Prenaster genus--a fossil species that roamed the seafloor roughly 50 million years ago.

"It's critical we fill the gaps in knowledge about the life that thrives in the Philippines--you never know when you're going to discover a living fossil among the corals. We want to work with folks in the Philippines and global scientific community to help sustain these unique environments for generations to come."

While several members of the expedition explored "shallow" Philippine reefs--anywhere from the surface to 130 feet deep--the Academy's highly-trained team scientific diving team plunged to the unbelievable depths to search for new species and collect live animals for an upcoming Twilight Zone aquarium exhibit. In a narrow band of mesophotic reefs, located between 150 and 500 feet deep, animals live in partial darkness, well beyond recreational diving limits yet above the deep trenches patrolled by submarines and ROVs.

Reaching those extreme depths requires Academy divers to push the boundaries of both technology and the human body, using closed-circuit "rebreathers" that extend the amount of time they can spend underwater. The rate of new-species discovery in the twilight zone can top ten per hour, but scientists are typically afforded a scant 30 minutes in this light-starved region before beginning a multi-hour period of decompression on the way back to the surface. This year, the team focused on bringing a selection of live fishes, corals, and jelly-like creatures safely to the surface, and back to the Academy's public aquarium located in San Francisco's Golden Gate Park.

"More humans have visited the moon than have dived to the twilight zone," says Steinhart Aquarium Director Bart Shepherd. "Most of what we observe and collect is so special--and often new to science--that we invented a custom decompression chamber to safely transport fishes to the surface. Seeing these animals in-person will help the public learn more about why we need to explore and help protect the entire ocean, and not just what lives at the surface."

Twilight zone specimen highlights include 15 species of fishes as well as strange, multi-colored ctenophores, or "comb jellies" collected from a depth of 280 feet. Shepherd and Academy Curator of Ichthyology Luiz Rocha spotted these Lyrocteis imperatoris attached to abandoned fishing line via fold-like appendages near their mouths. When hungry, the animal deploys long, sticky, hair-like tentacles into the surrounding waters to reel-in plankton, turning mealtime into an impressive display. Academy biologists are studying the live comb jellies behind the scenes with hopes to give the public an up-close look when the Twilight Zone exhibit opens in the summer of 2016.

"The Academy doesn't believe in 'parachute science' where researchers drop in, study wildlife, and leave," says Gosliner. "The world is changing before our eyes, and we need to work alongside global communities to build lasting, effective management strategies. Our scientists move beyond discovery, and work with locals to develop plans that sustain threatened ecosystems while honoring the livelihoods of people who work and raise their families near the coastline."

Expedition discoveries will be confirmed and described in the coming months as Academy scientists use DNA sequencing and other tools from the institution's Center for Comparative Genomics to analyze all specimens collected in the field, likely discovering even more new species in the process. Their work will be available for further study by the scientific community. In addition, the Academy hopes the pending Twilight Zone aquarium exhibit will promote greater awareness and conservation efforts, and perhaps inspire the next generation of ocean explorers.

Proceedings of the California Academy of Sciences

California Academy of Sciences discovers 100 new species in the Philippines

Journal
Proceedings of the California Academy of Sciences
Funder 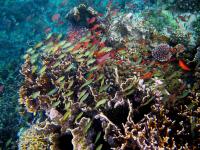