During the afternoon of Aug. 26, as major Hurricane Laura nears landfall near the Texas/Louisiana border, NASA satellites have been providing forecasters with a great deal of data on the storm, examining temperature, rainfall capability, storm structure and extent.

The MODIS instrument aboard NASA's Terra satellite provided a visible image of the large and powerful major Hurricane Laura in the Gulf of Mexico on Aug. 26, 2020 at 2:30 p.m. EDT. Laura's eye was clearly visible, the storm was well rounded, and the eye was surrounded by powerful thunderstorms.

A Storm Surge Warning is in effect for San Luis Pass, Texas to the mouth of the Mississippi River. A Storm Surge Warning means there is a danger of life-threatening inundation, from rising water moving inland from the coastline, during the next 36 hours in the indicated locations. Some of the storm surge forecasts are extreme. Johnson Bayou, LA to Rockefeller Wildlife Refuge including Calcasieu Lake is between 15 to 20 feet. Sea Rim State Park, TX to Johnson Bayou, LA including Sabine Lake is between 10 and 15 feet. Rockefeller Wildlife Refuge to Intracoastal City, LA between 10 and 15 feet. Intracoastal City, LA to Morgan City including Vermilion Bay between 8 to 12 feet.  For additional areas and storm surges, visit: http://www.nhc.noaa.gov.

A Storm Surge Watch is in effect for Freeport, Texas to San Luis Pass, Texas, the mouth of the Mississippi River to Ocean Springs, Mississippi, and for Lake Pontchartrain, Lake Maurepas, and Lake Borgne.

A Hurricane Watch is in effect for from east of Intracoastal City to west of Morgan City, Louisiana. Laura's Status on Aug. 26, 2020 at 2 p.m. EDT

Laura is moving toward the northwest near 16 mph (26 kph). A gradual turn toward the north-northwest and north is expected later today and tonight. Reports from an Air Force Reserve Hurricane Hunter aircraft indicate that maximum sustained winds have increased to near 140 mph (220 kph) with higher gusts.  Laura is an extremely dangerous category 4 hurricane on the Saffir-Simpson Hurricane Wind Scale.  Some additional strengthening is possible this afternoon, and Laura is forecast to remain a category 4 hurricane through landfall tonight.  Rapid weakening is expected after Laura makes over land.

The NHC warns that Laura will likely make landfall as a Category 4 hurricane and bring devastating effects. Heavy rain, dangerous storm surge, isolated tornadoes and hurricane-force sustained winds are expected. On the forecast track, Laura will approach the Upper Texas and southwest Louisiana coasts this evening and move inland within that area tonight. The center of Laura is forecast to move over northwestern Louisiana tomorrow, across Arkansas Thursday night, and over the mid-Mississippi Valley on Friday. 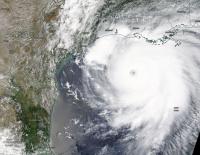