Gut microbes promote human health by fighting off pathogens, but they also contribute to diseases such as diabetes and cancer. A study published March 19th by Cell Reports reveals a potential strategy for tipping the balance in favor of good bacteria by altering the composition of the microbial community.

A group of Portuguese and Spanish researchers found that a chemical signal called autoinducer-2 (AI-2), which bacteria use to communicate with each other, can promote the right balance of gut microbes in antibiotic-treated mice. The findings pave the way for therapeutic strategies that harness the chemical language of bacteria to foster a healthy community of gut microbes.

"The bacteria in our intestines are extremely important for many aspects of our health," says senior study author Karina de Bivar Xavier of the Instituto Gulbenkian de Ciência in Portugal. "If we learn how to tailor their species composition and their functions in our favor, we will be able to use these bacteria to prevent infections and develop treatments for inflammatory bowel diseases and diet-induced microbial imbalances."

Antibiotic use and dietary factors can change the composition of gut microbes and strongly reduce bacterial diversity, posing a serious threat to human health by increasing host susceptibility to harmful pathogens such as Salmonella. In particular, shifts in the balance between Bacteroidetes and Firmicutes--the two predominant phyla in the mammalian gut--are associated with obesity, diabetes, chronic inflammatory bowel diseases, and gastrointestinal cancer. The ability to drive this community from a disease state to a healthy state, by manipulating the native signals and interactions that occur between its members, offers great potential for therapeutic benefit.

To test this idea, Xavier and her team focused on a small diffusible molecule called AI-2, which fosters interspecies communication throughout the bacterial kingdom. AI-2 produced by one species can influence gene expression in another species, enabling the entire population to synchronously regulate behaviors such as virulence and biofilm formation. These features make AI-2 an excellent candidate for mediating cell-cell interactions in the mammalian gut, where hundreds of bacterial species co-exist and interact.

To manipulate AI-2 levels in the mouse gut, the researchers constructed an Escherichia coli mutant that was deficient at absorbing AI-2 from the environment. When this mutant was introduced into the gastrointestinal tract of mice that were being treated with an antibiotic, the resulting increase in intestinal AI-2 levels altered the composition of gut microbes to favor the expansion of the Firmicutes phylum, which had been almost eliminated by the antibiotic.

"Because high AI-2 levels in the gut tipped the balance toward the healthy state during antibiotic treatment, it's possible that manipulation of this chemical signal may prevent the harmful effects of antibiotics, correct diet-induced microbial imbalances, and treat gastrointestinal diseases in humans," says co-first author Jessica Thompson of the Instituto Gulbenkian de Ciência.

Moving forward, the researchers will examine whether AI-2 accelerates the recovery of the protective functions of gut microbes against pathogens and infectious disease after antibiotic treatment. They will also determine the various functions of AI-2 signaling by examining how it affects gene expression in bacteria, as well as identify new bacterial receptors for AI-2 and other chemical signals.

"These receptors could be used as new drug targets to alter bacterial communication," says the study's co-first author Rita Almeida Oliveira of the Instituto Gulbenkian de Ciência. "This strategy to control bacteria may be a promising alternative to avoid the increasingly serious problem of bacterial resistance to antibiotics that are used today."

This work was funded by grants from the Howard Hughes Medical Institute and the Fundação para a Ciência e Tecnologia. 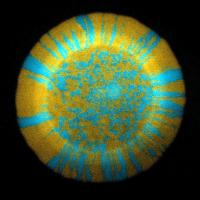