Since the Kobe Ocean Bottom Exploration Center (KOBEC) was established in 2015, the Center has carried out three survey voyages to the Kikai Caldera, south of Japan's main islands. Based on these voyages, researchers have confirmed that a giant lava dome was created after the caldera-forming supereruption 7300 years ago. The dome is in the world's largest class of post-caldera volcano, with a volume of over 32 cubic kilometers. The composition of this lava dome is different from the magma that caused the giant caldera to erupt - it shows the same chemical characteristics as the current post-caldera volcano on the nearby Satsuma Iwo-jima Island. It is possible that currently a giant magma buildup may exist under the Kikai Caldera.

These findings were published in the online edition of Scientific Reports on February 9.

There is roughly a 1% chance of a giant caldera-forming eruption occurring within the Japanese archipelago during the next 100 years. An eruption like this would see over 40 cubic kilometers of magma released in one burst, causing enormous damage. The mechanism behind this and how to predict this event are urgent questions.

Researchers equipped training ship Fukae Maru, part of the Kobe University Graduate School of Maritime Sciences, with the latest observation equipment to survey the Kikai Caldera. They chose this volcano for two main reasons. Firstly, for land-based volcanoes it is hard to carry out large-scale observations using artificial earthquakes because of the population density, and it is also difficult to detect giant magma buildups with precise visualization because they are often at relatively low depths (roughly 10km). Secondly, the Kikai Caldera caused the most recent giant caldera-forming eruption in the Japanese archipelago (7300 years ago), and there is a high possibility that a large buildup of magma may exist inside it.

In their upcoming March 2018 voyage, researchers plan to use seismic reflection and underwater robots to clarify the formation process of the double caldera revealed in previous surveys and the mechanism that causes a giant caldera eruption.

They will also use seismic and electromagnetic methods to determine the existence of a giant magma buildup, and in collaboration with the Japan Agency for Marine-Earth Science and Technology will carry out a large-scale underground survey, attempting to capture high-resolution visualizations of the magma system within the Earth's crust (at a depth of approximately 30km). Based on results from these surveys, the team plans to continue monitoring and aims to pioneer a method for predicting giant caldera-forming eruptions.

Formation of metallic ore deposits are predicted to accompany the underwater hydrothermal activity, so the team also plan to evaluate these undersea resources.

1. Caldera: a depression in the land formed when a volcano erupts

2. Giant caldera-forming eruption: an eruption that releases a large amount of magma (?40km3) and forms a large-scale caldera. This sort of eruption has occurred ten times on the Japanese archipelago in the last 120,000 years. Giant caldera volcanoes are concentrated in Kyushu and Hokkaido.

3. Seismic reflection survey: Causing an artificial earthquake with air guns or similar, receiving the seismic waves that have reflected or refracted below ground, and estimating the subsurface structure. 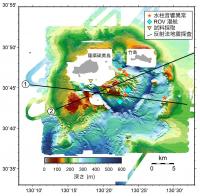 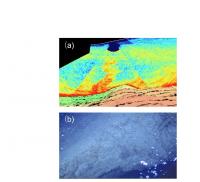