The blue whale is the largest animal that has ever lived. And yet they feed almost exclusively on tiny crustaceans known as krill. The secret is in the baleen, a complex filter-feeding system that allows the enormous whales to strain huge volumes of saltwater, leaving only krill and other small organisms behind. Now, researchers who have described an extinct relative of baleen whales in Current Biology on June 29 offer new insight into how baleen first evolved.

The findings shed light on a long-standing debate about whether the first baleen whales were toothless suction feeders or toothed whales that used their teeth like a sieve to filter prey out of water, the researchers say. The teeth of the newly discovered species of mysticete, called Coronodon havensteini, lend support to the latter view.

"We know from the fossil record that the ancestors of baleen whales had teeth," says Jonathan Geisler of the New York Institute of Technology College of Osteopathic Medicine. "However, the transition from teeth to baleen is controversial. Our study indicates that early toothed whales used spaces between their large complex teeth for filtering and that baleen gradually replaced teeth over millions of years."

The new whale species was found in the early 2000s by a scuba diver in South Carolina's Wando River. He was looking for shark teeth and found the fossilized whale instead. The whale, which lived some 30 million years ago, was later recognized as a representative of a new transitional species.

"The skull of this species indicates that it split off very early in mysticete whale evolution, and our analyses confirm that evolutionary position," Geisler says.

Geisler and his colleagues realized that meant the whale could offer important clues about the teeth to baleen transition. The whale under study also had other interesting features. It was larger than other toothed mysticetes, with a skull nearly one meter long. Its large molars in comparison to other whales further suggested an unusual feeding behavior.

Closer examination of the shape and wear on the whale's teeth led the researchers to conclude that the whale used its front teeth to snag prey. But the whale's large, back molars were used in filter feeding, by expelling water through open slots between the closed teeth.

"The wear on the molars of this specimen indicates they were not used for shearing food or for biting off chunks of prey," he says. "It took us quite some time to come to the realization that these large teeth were framing narrow slots for filter feeding."

As confirmation, the researchers found wear on the hidden cusps bordering those slots between the teeth.

The findings offer another example of a broader evolutionary pattern in which body parts (in this case teeth) that evolved for one function are later co-opted for another function. The researchers say they are now examining closely related species from the Charleston, SC, area in search of additional evidence. 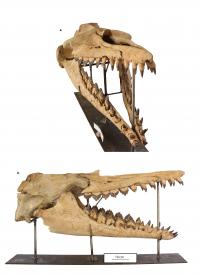