Intratumor morphological heterogeneity (diversity) of breast cancer is not related to chromosome aberrations. This conclusion was made based on the study of one case with aggressive variant of breast cancer - invasive micropapillary carcinoma by researchers from Tomsk State University (TSU), Tomsk Cancer Research Institute (TCRI), and Institute of Medical Genetics. The research has been published in Journal of Clinical Pathology June 15, 2015. The investigation was led by Vladimir Perelmuter, MD, PhD, Head of the Department of Pathological Anatomy and Cytology and Nadezhda Cherdyntseva, PhD, Head of the Laboratory of Molecular Oncology and Immunology.

To understand whether intratumor morphological heterogeneity in breast cancer is determined by genetic alterations, Dr. Evgeny Denisov (Postdoc at TSU and Senior researcher at TCRI) and colleagues investigated the spectrum of chromosome aberrations in different morphological structures obtained from two distinct regions of one breast tumor.

To obtain these results, researchers used two samples of the primary tumor from patient with aggressive form of breast cancer - invasive micropapillary carcinoma, which shows high intratumoral morphological diversity. Five types of different morphological structures were obtained from each tumor sample using laser microdissection, which allows the isolation of pure tumor cell populations without admixture of adjacent non-tumor stroma cells. DNA samples were prepared from each sample of morphological structures and used for the identification of chromosome aberrations by comparative genomic hybridization-based microarrays.

For this aim, metastatic cells were isolated from lymph node of the studied breast cancer case, analyzed for chromosome abnormalities, and compared with each structure from each tumor region in genetic portrait. It turns out that only solid structures (but not alveolar) from the 2nd tumor region had the greatest similarity with lymph node metastases in common chromosome aberrations. It turns out that lymph node metastases were the descendants of these solid structures. However, it is unknown whether this relationship is true for other breast cancer cases and how to explain the association of alveolar structures with lymph node metastases. Future studies should be performed to confirm or refute the obtained data.

Running forward, the team performed whole transcriptome profiling of different morphological structures of three breast cancers and found specific genes contributed to the formation of each type of structures. In addition, they were able to identify genes involved in the above mentioned contribution of morphological structures to breast cancer metastasis and chemotherapy response (the paper is prepared for publication).

"At present it is not clear what factors regulate differential gene expression in different morphological structures, - Dr. Denisov added. - We are planning to identify these regulators, which provoke tumor cells to form different structures."

Researchers hope to identify targets specific for aggressive morphological structures (e.g. alveolar and trabecular) and to develop new treatment strategies focused on their elimination. If to destroy these structures in breast tumors, then it is possible to increase chemosensitivity and decrease metastasis risk of breast cancer.

Intratumor morphological heterogeneity of cancer is not related to chromosome aberrations 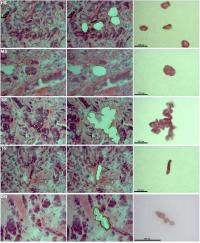