NASA's Aqua satellite and NASA-NOAA's Suomi NPP satellite analyzed the temperatures in Hurricane Nate's cloud tops and determined that the most powerful thunderstorms and heaviest rain areas were around the center of the tropical cyclone after it made landfall near the mouth of the Mississippi River.

At 8 p.m. EDT/7 p.m. CDT on Oct. 7, Hurricane Nate's eye was at the mouth of the Mississippi River. National Weather Service radar data and surface observations indicated that Hurricane Nate made landfall near Biloxi, Mississippi, around 12:30 a.m. CDT/1:30 a.m. EDT on Oct. 8, with maximum winds of 85 mph (140 kph).

The powerful storms in Nate have the capability to generate heavy rainfall and will continue as Nate moves further inland. The National Hurricane Center forecast noted that Nate is expected to produce the following rain accumulations through Monday: East of the Mississippi River from the central Gulf Coast into the Deep South, eastern Tennessee Valley, and southern Appalachians: 3 to 6 inches, maximum 10 inches.Across the Ohio Valley into the central Appalachians: 2 to 5 inches, maximum 7 inches.

Nate was moving toward the north-northeast near 23 mph (37 kph). A turn toward the northeast with an increase in forward speed is expected during the next couple of days. Maximum sustained winds have decreased to near 45 mph (75 kph) with higher gusts. The estimated minimum central pressure is 994 millibars.

On the forecast track, Nate's center will continue to move inland across the Deep South, Tennessee Valley, and central Appalachian Mountains through Monday. Nate is expected to continue to quickly weaken as it moves farther inland. It should degenerate into a remnant low late Monday, Oct. 9. 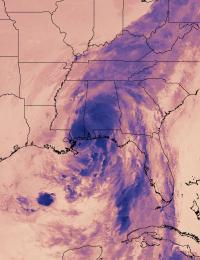