Scientists at The University of Manchester have made an important discovery about an immune cell which is already being used in immunotherapy to treat diseases such as type I diabetes.

Dr Mark Travis and his team at the Manchester Collaborative Centre for Inflammation Research have been studying an important cell that prevents harmful immune responses. Their research detailing how regulatory T cells can cure inflammatory disease has been published in the journal Immunity.

T cells are important in fighting infection as they're mostly designed to act against foreign invaders to the body such as pathogens. But there are some T-cells that react and attack our own tissues, resulting in autoimmune diseases, such as type I diabetes and rheumatoid arthritis. Regulatory T cells are crucial cells in stopping these harmful T cells from causing disease, and are therefore being used as potential therapies to treat autoimmune diseases.

The Manchester researchers have identified new and crucial molecules which allow regulatory T cells to function and cure active inflammation during disease.

Dr Travis explains the importance of their work: "Regulatory T cells are already being used in clinical trials where the cells are taken from the patient, multiplied and then given back to the patient to suppress their illness. By understanding the mechanisms behind how regulatory T cells work, we could improve on these therapies, which can be potentially useful in conditions ranging from type 1 diabetes to multiple sclerosis, rheumatoid arthritis and inflammatory bowel disease.

"This knowledge is vitally important when trying to make regulatory T-cells for therapy. By knowing the importance of this pathway, we can now work to improve the suppressive nature of regulatory T cells to make them more effective as treatments for disease."

He continues: "It's fascinating that getting rid of just one molecule can have such an impact on the body's ability to fight disease. Our research is all about how the molecules interlink and react to each other, and in certain situations targeting just one molecule can boost or inhibit a response."

For this paper the Manchester researchers demonstrated that the same molecules are expressed in humans as well as animal models. The next step will be to look at how the mechanism works in humans during disease, for which they plan to target inflammatory bowel disease.

Dr John Worthington, a Wellcome Trust Stepping Stones Fellow, worked alongside Dr Travis on the paper: "We're hopeful this research will have a real impact on treatment therapies that use regulatory T cells, either by boosting their function by targeting this pathway or by cherry picking the very best regulatory cells to prevent autoimmunity. Understanding how these cells operate in such detail can only lead to more effective ways to fight a whole range of inflammatory conditions." 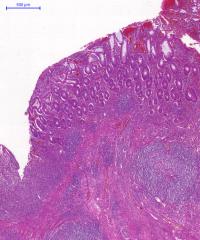