The Early Cretaceous Jehol Biota, renowned for its exceptionally well preserved volcanic-influenced ecosystem, was buried in lacustrine and occasionally fluvial sediments in northern Hebei and western Liaoning, China. It includes large amount of evolutionarily significant taxonomy, e.g. feathered dinosaurs, early birds, mammals and flowering plants, representing one of the most diversified terrestrial biotas of the Mesozoic and providing exceptional windows into some major fundamental issues in earth and biological sciences, such as the origins of birds and angiosperm, and co-evolution of life and environments.

The evolutionary radiation of the Jehol Biota can be broadly divided to three phases, with the first phase limited to a small area in northern Hebei (Huajiying Formation), the second phase expanding to western Liaoning (Yixian Formation), and the third phase (Jiufotang Formation). Specifically, the Yixian Formation marks the greatest bio-diversification, and the Lujiatun Unit in its lowermost part preserves numerous three-dimensional dinosaurs fossils with gesture, often referred to as "Chinese Dinosaurs Pompeii" (Fig. 1). It is therefore crucial to precisely determine the timing and duration of the Yixian Formation. Despite considerable efforts in the past two decades attempting to achieve this goal, the published results (Fig. 2) are inconsistent, confusing and inadequate. The duration of the Yixian Formations and the relative temporal and stratigraphical sequences between Lujiatun (LJT) and Jiahsangou (JSG) Units remained controversial until recently.

Supported by the National Natural Science Foundation and Chinese Academy of Sciences, a group led by Prof. Yi-Gang Xu from the Guangzhou Institute of Geochemistry, CAS, in collaboration with Prof. Qing-Zhu Yin's team at the University of California at Davis has carried out high-precision geochronology study on the Yixian Formation, using U-Pb chemical abrasion-isotope dilution-isotope ratio mass spectrometry (CA-ID-IRMS) dating technique with a typical analytical precision <0.05%. They extracted mineral zircon (ZrSiO4) grains from volcanic tuff layers collected from the top, middle and bottom of the Yixian Formation in the Jin-Yang basin, Liaoning, China. The results show the onset at 125.755 ± 0.061 Ma and termination at 124.122 ± 0.048 Ma of the Yixian Formation, respectively. The age of the top of the Lujiatun Unit is 125.684 ± 0.060 Ma, distinguishable from that of the Jianshangou Unit of lacustrine deposits (125.457 ± 0.051 Ma (Fig. 2).

These new ages have significant implications at several fronts.

(1) The duration of the Yixian Formation is tightly bracketed to 1.633 ± 0.078 Myr in Jin-Yang basin, significantly shorter than the previous broad range estimates of ~2 - 7 Myr, lending strong supports to a rapid bio-diversification during this period.

(2) The ages of the Lujiatun and Jianshangou units are resolvable, with the latter being sequentially deposited later than the former, therefore arguing against the idea of synchronous deposition of the two units spatially. Moreover, the extraordinarily short duration of Lujiatun Unit <71 ± 86 Kyr supports a sudden nature of the deposition event(s) linked with dramatic volcano-pyroclastic flows.

(3) The refined duration of the Yixian Formation also yields important insights on the duration of the JSG lacustrine deposits. It effectively rules out that the lacustrine cyclostratigraphy documented in part of the Yixian Formation was driven by orbital eccentricity, but more likely obliquity or precession signals. To interpret the observed 2 m cycle as 100 Kyr eccentricity cycle for a 41 m JSG Unit would mean the Jianshangou Unit alone would last >2 Myr, whereas the entire Yixian Formation, which include JSG Unit within it, lasted only 1.633 Myr, according to this study. The result makes sense in that when the temporal resolution is high, we expect to see precession signal to be most pronounced. This is because the Earth's precession change contributes the most to the insolation that ultimately drive hydro-climate changes in Milankovitch cycles.

Short duration of the Yixian Formation and 'Chinese Dinosaurs Pompeii' 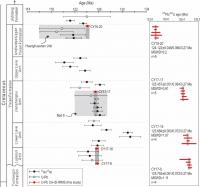