Results of a new study led by researchers at William & Mary’s Virginia Institute of Marine Science show that adult blue crabs are much more tolerant of low-oxygen, “hypoxic” conditions than previously thought.

The findings--based on experiments using high-tech computer-controlled respirometers--contradict earlier studies of the tasty crustacean's ability to function in oxygen-poor waters, thus helping to explain what had been somewhat of an ecological mystery.

Lead author Rich Brill, a fishery biologist with NOAA's National Marine Fisheries Service and adjunct faculty at VIMS, says "The notion that blue crabs are relatively intolerant of oxygen-poor waters was counterintuitive, because this species often occupies estuarine environments that can become hypoxic even in the absence of human activities."

The researchers undertook the study in light of concerns about decreasing levels of oxygen in coastal waters worldwide, and how the growing prevalence of low-oxygen "dead zones" might affect populations and management of blue crabs and other coastal marine life. Their work was published in the October issue of the Journal of Experimental Marine Biology and Ecology.

The increase in dead zones is attributed to excess inputs of nitrogen from fertilizers, sewage, and other human sources. When the algae in nitrogen-fueled algal blooms die and sink, they provide a rich food source for bacteria, which in the act of decomposition take up dissolved oxygen from nearby waters.

"Because coastal hypoxia can significantly impact the movements, distribution, growth, and reproduction of inshore fish and invertebrate species, understanding their ability to tolerate hypoxia is becoming crucial; especially in species of ecological and commercial importance," says Brill.

He explains the discrepancy between his team's findings and earlier results by pointing to improvements in the scientific instrumentation used to measure respiration and metabolism.

"The older studies took place prior to the easy availability of personal computers and were thus of limited duration," says Brill. "The instruments were set up and the data recorded with pencil and paper during 'business hours'." Scientists now know that it can take many hours for aquatic animals to recover from the stress of transfer from a holding tank to a respirometer, thus confounding the results of short-term studies.

Brill and his research colleagues--Peter Bushnell of Indiana University South Bend; Timothy Elton of Bangor University, Wales; and Hamish Small of VIMS--conducted their studies using "automated intermittent-flow respirometry," in which individual crabs are placed in a closed container and their oxygen usage measured every second using fiberoptic and fluorescent sensors.

"With the ability to automate the whole data-recording system," says Brill, "we were able to collect data with minimal human intervention, and--more importantly--around-the-clock and for several days. This allowed us to not start the low-oxygen trial until we were sure the effects of handling and transfer had completely dissipated." They conducted their studies at VIMS' Eastern Shore Laboratory in Wachapreague, using crabs collected from nearby tidal creeks.

Results of their experiments show that--contrary to previous studies--blue crabs are "oxygen regulators" that can maintain a constant rate of aerobic metabolism until they reach a critical oxygen level. Earlier studies suggested that blue crabs were "oxygen conformers" whose metabolic rate fell in concert with reductions in the oxygen concentration of surrounding waters.

The critical oxygen level varied with the metabolic state of the tested crabs--which the researchers could raise by increasing the water temperature, feeding a crab a meal of menhaden, or using crabs infected with a parasite known to boost metabolism. At 62°F and 72°F, the critical oxygen level was less than 2 milligrams of oxygen per liter of water; this increased to between 2 and 3 milligrams per liter at 82°F, and when testing recently fed and infected crabs.

"Our results are consistent with the oxygen levels shown to influence blue crab behaviors in both field and laboratory settings," says Brill, and "support the idea that blue crabs are well adapted to the hypoxic conditions occurring in the estuarine environments they occupy." The results show that blue crabs can--at moderate water temperatures--survive at oxygen levels as low as 1.3 milligrams per liter, just 15% of the oxygen available in fully saturated seawater.

A concern is what happens to the crabs' critical oxygen level as water temperatures in Chesapeake Bay continue to rise with global warming. Bay temperatures have already risen 1.5 to 2.5°F since 1960, and are projected to rise another 3.5° to 9°F by as early as 2070.

"Our data show that the metabolic rates of blue crabs increase with increasing temperature, and this in turn increases the lowest oxygen levels they can survive. So warming of the Bay will exacerbate the effects of hypoxia on blue crabs, as it will with almost all other organisms," says Brill.

The team's experiments showed that the metabolic rate of tested blue crabs doubled when going from 62°F to 72°F, and increased almost 6-fold with another 10°F rise in water temperature from 72°F to 82°F. The metabolic rates of fed individuals, and those infected with the common blue crab parasite Hematodinium perezii, were both more than double those of unfed, uninfected individuals at 72°F. Fed crabs at 82°F exhibited a further 60% increase in metabolic rate from that of unfed individuals measured at the same temperature. 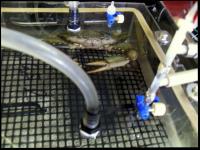