A century-old technology that scientists use to probe the ionosphere -- the important atmospheric layer that can interfere with the transmission of radio waves -- is getting smaller.

A team of NASA scientists and engineers at the Goddard Space Flight Center in Greenbelt, Maryland, is upgrading and miniaturizing the electronics on a prototype instrument, called the Concentration vs. Height for an Orbiting Electromagnetic Sounder, or ECHOES. The device could be used to "sound" the ionosphere from either a ground-based observatory or ultimately a constellation of CubeSats.

The ionospheric layer, which is electrically charged or ionized primarily by extreme-ultraviolet radiation coming from the sun during the day or by the bombardment of cosmic rays during the night, is of interest to scientists because of the role it plays in the transmission of radio waves.

Depending on the concentration of electrons in the ionosphere and the frequency of the radio waves, the layer reflects radio waves to Earth, rather than allowing them to escape into space. However, solar flares, the spontaneous eruption of high-energy radiation from the surface of the sun, can cause a sharp increase in the number of ionized particles, thus changing the height and density of the particles.

"Gravity pulls the denser plasma (ionized gas) down toward Earth to lower altitudes that are less dense. This is an unstable configuration," said ECHOES Principal Investigator and Goddard scientist Mark Adrian. "This motion leads to a turbulent mixing of the ionosphere, not unlike pouring cream into your morning coffee. This produces density irregularities or structures that reflect and refract radio waves -- what we simply refer to as interference."

To determine the electron density vertically in the ionosphere, scientists have long used radio sounders -- in essence, dedicated radio stations. A range of different radio frequencies are directed vertically to the ionosphere and a receiver then collects and measures the values of the returning signals or echoes.

The immediate plan is to use ECHOES on the ground, contributing to a network of instruments that support space-weather prediction and real-time mapping of the ionosphere. However, the instruments also could fly in space, for example, in a constellation of CubeSats that would make simultaneous, multi-point soundings of the top-side of Earth's enveloping ionosphere, which lies 46 to about 621 miles above Earth's surface.

The sounding technique is at least a century old. However, it wasn't until the dawn of the space age that the technique was applied to sounding-rocket and full-fledged satellite missions, such as the Canadian-built and NASA-launched Alouette 1 in 1962. More recently, NASA launched the Radio Plasma Imager on a mission called the Imager for Magnetopause-to-Aurora Global Exploration, or IMAGE. Also, the Jet Propulsion Laboratory, in collaboration with its European partners, provided another sounder, the Mars Advanced Radar for Subsurface and Ionospheric Sounding, for the European Space Agency's Mars Express mission.

"Basically, what we're doing is miniaturizing a 100-year-old radio receiver signal-processing technology," said ECHOES co-Principal Investigator Damon Bradley, who led the development of the digital signal-processing system for the radiometer on NASA's Soil Moisture Active Passive, or SMAP mission, which tracks global soil-moisture levels. "ECHOES is essentially a low-frequency radar that uses space-based digital-signal processing, as on SMAP, but for probing the ionosphere as opposed to mapping global soil-moisture levels."

Before the miniaturized instrument can fly in space, however, the team needs to prove that it's capable of obtaining density measurements in a relevant environment. As part of its technology-development effort, the team plans to integrate ECHOES electronics and antenna systems with other instrument hardware and execute a test at the Goddard Geophysical and Astronomical Observatory later this year.

"A successful proof-of-concept demonstration of the ECHOES instrument would place Goddard in a unique position to compete for other future Heliophysics or planetary opportunities, particularly those involved CubeSat or small-satellite platforms," Adrian said.

NASA team miniaturizes century-old technology for use on CubeSats 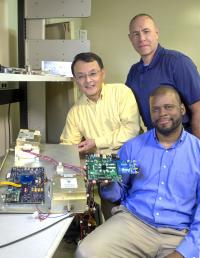