A new assistive technology developed by engineers at the Georgia Institute of Technology could help individuals with severe disabilities lead more independent lives.

The novel system allows individuals with disabilities to operate a computer, control a powered wheelchair and interact with their environments simply by moving their tongues.

"This device could revolutionize the field of assistive technologies by helping individuals with severe disabilities, such as those with high-level spinal cord injuries, return to rich, active, independent and productive lives," said Maysam Ghovanloo, an assistant professor in the Georgia Tech School of Electrical and Computer Engineering. Ghovanloo developed the system with graduate student Xueliang Huo.

The tongue-operated assistive technology, called the Tongue Drive system, was described on June 29 at the 2008 Rehabilitation Engineering and Assistive Technology Society of North America (RESNA) Annual Conference in Washington, D.C. An article about this system is also scheduled to appear in an upcoming issue of the Journal of Rehabilitation Research and Development. This research was funded by the National Science Foundation and the Christopher and Dana Reeve Foundation.

To operate the Tongue Drive system, potential users only need to be able to move their tongues. Attaching a small magnet, the size of a grain of rice, to an individual's tongue by implantation, piercing or tissue adhesive allows tongue motion to direct the movement of a cursor across a computer screen or a powered wheelchair around a room.

"We chose the tongue to operate the system because unlike hands and feet, which are controlled by the brain through the spinal cord, the tongue is directly connected to the brain by a cranial nerve that generally escapes damage in severe spinal cord injuries or neuromuscular diseases," said Ghovanloo, who started working on this project about three years ago at North Carolina State University. "Tongue movements are also fast, accurate and do not require much thinking, concentration or effort."

Movement of the magnetic tracer attached to the tongue is detected by an array of magnetic field sensors mounted on a headset outside the mouth or on an orthodontic brace inside the mouth. The sensor output signals are wirelessly transmitted to a portable computer, which can be carried on the user's clothing or wheelchair.

The sensor output signals are processed to determine the relative motion of the magnet with respect to the array of sensors in real-time. This information is then used to control the movements of a cursor on the computer screen or to substitute for the joystick function in a powered wheelchair.

The system can potentially capture a large number of tongue movements, each of which can represent a different user command. A unique set of specific tongue movements can be tailored for each individual based on the user's abilities, oral anatomy, personal preferences and lifestyle.

"An individual could potentially train our system to recognize touching each tooth as a different command," explained Ghovanloo. "The ability to train our system with as many commands as an individual can comfortably remember is a significant advantage over the common sip-n-puff device that acts as a simple switch controlled by sucking or blowing through a straw."

The Tongue Drive system is also non-invasive and does not require brain surgery like some of the brain-computer interface technologies.

Ghovanloo's group recently completed trials in which six able-bodied individuals tested the Tongue Drive system. Each participant defined six tongue commands that would substitute for computer mouse tasks – left, right, up and down pointer movements and single- and double-click. For each trial, the individual began by training the system. During the five-minute training session, the individual repeated each of the six designated tongue movements 10 times.

During the testing session, the user moved his or her tongue to one of the predefined command positions and the mouse pointer started moving in the selected direction. To move the cursor faster, users could hold their tongue in the position of the issued command to gradually accelerate the pointer until it reached a maximum velocity.

Results of the computer access test by novice users with the current Tongue Drive prototype showed a response time of less than one second with almost 100 percent accuracy for the six individual commands. This is equivalent to an information transfer rate of approximately 150 bits per minute, which is much faster than the bandwidth of most brain-computer interfaces, according to Ghovanloo.

The researchers have also tested the ability of twelve able-bodied individuals to operate an electric-powered wheelchair with the Tongue Drive system. The next step is to test and assess the usability and acceptability of the system by people with severe disabilities, said Ghovanloo. He is teaming with the Shepherd Center, an Atlanta-based catastrophic care hospital, and the Georgia Tech Center for Assistive Technology and Environmental Access, to conduct those trials.

The research team has also begun to develop software to connect the Tongue Drive system to a wide variety of readily available communication tools such as text generators, speech synthesizers and readers. In addition, the researchers plan to add control commands, such as switching the system into standby mode to permit the user to eat, sleep or engage in a conversation while extending battery life.

"We hope this technology will reduce the need of individuals with severe disabilities to receive continuous assistance from family members or caregivers, thus significantly reducing healthcare and assistance costs," noted Ghovanloo. "This system may also make it easier for them to work and communicate with others, such as friends and family."

The Journal of Rehabilitation Research and Development 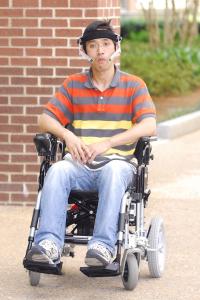 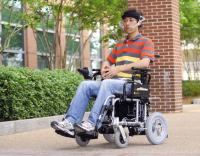