Flying insects and parasites are often vectors for disease, but a mosquito needs to first find someone before they can bite them. In a recent study published in Frontiers in Ecology and Evolution, researchers examined bird nests in order to understand how insects and parasites detect gases such as carbon dioxide and methane as a way to locate their hosts.

The researchers focused on blue tit bird nest boxes located in a deciduous forest in central Spain. They found that the nests contained more biting midges when concentrations of carbon dioxide were higher inside the nest compared to the forest air. "This is important because biting midges are the main vector of Haemoproteus, the most abundant blood parasite infecting birds in our study area," says Dr. Santiago Merino of the National Museum of Natural Sciences in Madrid, one of the researchers on the study.

With the looming threat of climate change, rising carbon levels will affect every aspect of our ecosystem - from the largest to the smallest organism. "Predictions expect an increase of diseases in northern latitudes due to climate change," he says, "But factors like gas concentrations and temperature may affect the incidence of diseases," as well.

The first step to understanding the future of course, is studying the present. "We want to know how the relationship between gas concentrations and parasite attraction is changing," Merino says, "in order to adjust our predictions on extension of diseases."

Bird nesting cavities offered a unique opportunity to study the interaction between gas concentration and parasites since the enclosed space allows for better comparisons. In addition to the positive correlation between carbon dioxide and biting midges, Merino and his colleagues found that there were more mites inside the nests when carbon dioxide was higher, and more black flies when methane was lower. The methane concentration may be related to bacteria in the nesting materials.

The authors also factored in variables such as temperature, brood size, and time to their analyses. When there were no nestlings present in the nest boxes, carbon dioxide concentration inside the nest was not significantly different compared with the forest air, indicating that the presence of nestlings caused gas fluctuations.

Merino says that the relationship between humidity and gas concentration is important and, while it was examined in this study, it should be studied further. While the study is limited in its focused approach, the authors would like to collaborate with other researchers working in different environments to see if their results differ in other conditions. 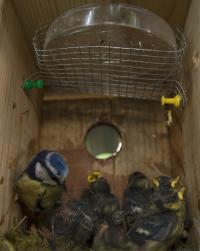