Wind blowing on the ocean is a crucial factor mixing the greenhouse gas carbon dioxide into the ocean depths and keeping it from going back into the atmosphere.

For more than two decades scientists have suspected there's another – possibly substantial – source of energy for mixing that's generated in the ocean where cold, heavy water collides with warm, light water. However, there's never been a way to get enough measurements of such a "front" to prove this – until now.

University of Washington and Stanford University researchers report in the print edition of Science April 15 about turbulence at a front near Japan that is 10 to 20 times more energetic than what the wind could generate.

Without such data, the turbulence and mixing contributed by fronts can't be reliably accounted for in climate models, according to Eric D'Asaro, oceanographer with the UW Applied Physics Laboratory and School of Oceanography. Climate modelers, for example, need an accurate reading of how rapidly carbon dioxide is mixed into the depths, or interior, of the ocean in order to use the models to predict the effects of climate change, he says. Right now, for instance, the oceans absorb about 30 percent of the carbon dioxide released into the atmosphere.

"Progress in understanding the dynamics of fronts has been hampered by lack of observations," says Raffaele Ferrari, Massachusetts Institute of Technology professor of oceanography, who is not involved with the paper.

"The research represents a remarkable breakthrough in that it provides possibly the first direct observations of how an ocean front works on scales from kilometers to millimeters," Ferrari says. He's the author of a "Perspectives" piece in Science April 15 about the challenges of representing oceanic fronts in climate models.

Thousands of fronts develop in the ocean where bodies of water with different characteristics meet. Typically one is colder and the other warmer: think of river water flowing into the ocean, or ocean currents from the tropics encountering those from the poles. Fronts can be small, stretching only hundreds of yards while others go on for miles; some exist only briefly while others persist for weeks or months; and the path of a front is continually meandering.

The ever-changing position and shape of fronts is what makes them devilish to measure.

"It's like trying to watch a tadpole grow while it's being carried downstream in a river," says Craig Lee, oceanographer with the UW Applied Physics Laboratory and School of Oceanography and a co-author of the paper. "You can't expect to sit in one place and watch it turn into a frog – you have to follow it wherever it goes."

D'Asaro, Lee and their colleagues picked the Kuroshio front off Japan for their attempt. The Kuroshio current, second in strength only to the Gulf Stream, carries warm water north from the subtropics and forms a front where it meets cold subpolar water carried south by the Oyashio current.

Although the front is strong and persistent, the scientists had to choose one particular piece, continually track its exact location as it was carried downstream and measure it. Floats developed by D'Asaro, which are programmable and buoyant in a way that they can stick with a moving and undulating body of water, marked the location of the chosen section and relayed acoustic signals so a ship could go to the front and measure what was happening.

At the Kuroshio front, winds blowing along the front combined with the Earth's rotation create currents that flow across the front pulling cold water over warm. Cold water is heavier than warm water and turbulence is created as the top-heavy waters sort themselves out, creating new, more-temperate layers of warm on top of cold water.

The work involved "a great deal of ingenuity to keep all these tools along a front for a few weeks," Ferrari says.

What they found at the strong Kuroshio front, D'Asaro says, is likely an extreme example of a process that occurs much more widely in the ocean.

"It's not just wind at work on the ocean. The enhanced mixing at this front is drawing energy from the entire North Pacific. That's what's really new," D'Asaro says.

It would be useful to measure other fronts, such as those associated with the Gulf Stream and Antarctic circumpolar currents, to further define their role in ocean dynamics and climate models, Lee says.

Along with D'Asaro and Lee, other co-authors are Luc Rainville and Ramsey Harcourt with the UW's Applied Physics Laboratory, and Leif Thomas with Stanford University. The work was funded by the Office of Naval Research.

Data catches up with theory: Ocean front is energetic contributor to mixing 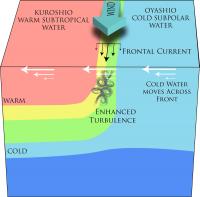