Archaeologists with the University of Cincinnati have discovered two Bronze Age tombs containing a trove of engraved jewelry and artifacts that promise to unlock secrets about life in ancient Greece.

The UC archaeologists announced the discovery Tuesday in Greece.

Jack Davis and Sharon Stocker, archaeologists in UC's classics department, found the two beehive-shaped tombs in Pylos, Greece, last year while investigating the area around the grave of an individual they have called the "Griffin Warrior," a Greek man whose final resting place they discovered nearby in 2015.

Like the Griffin Warrior's tomb, the princely tombs overlooking the Mediterranean Sea also contained a wealth of cultural artifacts and delicate jewelry that could help historians fill in gaps in our knowledge of early Greek civilization.

UC's team spent more than 18 months excavating and documenting the find. The tombs were littered with flakes of gold leaf that once papered the walls.

"Like with the Griffin Warrior grave, by the end of the first week we knew we had something that was really important," said Stocker, who supervised the excavation.

"It soon became clear to us that lightning had struck again," said Davis, head of UC's classics department.

The Griffin Warrior is named for the mythological creature -- part eagle, part lion -- engraved on an ivory plaque in his tomb, which also contained armor, weaponry and gold jewelry. Among the priceless objects of art was an agate sealstone depicting mortal combat with such fine detail that Archaeology magazine hailed it as a "Bronze Age masterpiece."

Artifacts found in the princely tombs tell similar stories about life along the Mediterranean 3,500 years ago, Davis said. A gold ring depicted two bulls flanked by sheaves of grain, identified as barley by a paleobotanist who consulted on the project.

"It's an interesting scene of animal husbandry -- cattle mixed with grain production. It's the foundation of agriculture," Davis said. "As far as we know, it's the only representation of grain in the art of Crete or Minoan civilization."

Like the grave of the Griffin Warrior, the two family tombs contained artwork emblazoned with mythological creatures. An agate sealstone featured two lion-like creatures called genii standing upright on clawed feet. They carry a serving vase and an incense burner, a tribute for the altar before them featuring a sprouting sapling between horns of consecration, Stocker said.

"It's rare. There aren't many 16-pointed stars in Mycenaean iconography. The fact that we have two objects with 16 points in two different media (agate and gold) is noteworthy," Stocker said.

The genius motif appears elsewhere in the East during this period, she said.

"One problem is we don't have any writing from the Minoan or Mycenaean time that talks of their religion or explains the importance of their symbols," Stocker said.

"Its discovery is particularly interesting in light of the role she played in Egypt as protectress of the dead," Davis said.

The identity of the Griffin Warrior is a matter for speculation. Stocker said the combination of armor, weapons and jewelry found in his tomb strongly indicate he had military and religious authority, likely as the king known in later Mycenaean times as a wanax.

Likewise, the princely tombs paint a picture of accumulated wealth and status, she said. They contained amber from the Baltic, amethyst from Egypt, imported carnelian and lots of gold. The tombs sit on a scenic vista overlooking the Mediterranean Sea on the spot where the Palace of Nestor would later rise and fall to ruins.

"I think these are probably people who were very sophisticated for their time," she said. "They have come out of a place in history where there were few luxury items and imported goods. And all of a sudden at the time of the first tholos tombs, luxury items appear in Greece.

"You have this explosion of wealth. People are vying for power," she said. "It's the formative years that will give rise to the Classic Age of Greece."

The antiquities provide evidence that coastal Pylos was once an important destination for commerce and trade.

"If you look at a map, Pylos is a remote area now. You have to cross mountains to get here. Until recently, it hasn't even been on the tourist path," Stocker said. "But if you're coming by sea, the location makes more sense. It's on the way to Italy. What we're learning is that it's a much more central and important place on the Bronze Age trade route."

The princely tombs sit close to the palace of Nestor, a ruler mentioned in Homer's famous works "The Iliad" and "The Odyssey." The palace was discovered in 1939 by the late UC Classics professor Carl Blegen. Blegen had wanted to excavate in the 1950s in the field where Davis and Stocker found the new tombs but could not get permission from the property owner to expand his investigation. The tombs would have to wait years for another UC team to make the startling discovery hidden beneath its grape vines.

Excavating the site was particularly arduous. With the excavation season looming, delays in procuring the site forced researchers to postpone plans to study the site first with ground-penetrating radar. Instead, Stocker and Davis relied on their experience and intuition to focus on one disturbed area.

"There were noticeable concentrations of rocks on the surface once we got rid of the vegetation," she said.

Those turned out to be the exposed covers of deep tombs, one plunging nearly 15 feet. The tombs were protected from the elements and potential thieves by an estimated 40,000 stones the size of watermelons.

The boulders had sat undisturbed for millennia where they had fallen when the domes of the tombs collapsed. And now 3,500 years later, UC's team had to remove each stone individually.

"It was like going back to the Mycenaean Period. They had placed them by hand in the walls of the tombs and we were taking them out by hand," Stocker said. "It was a lot of work."

At every step of the excavation, the researchers used photogrammetry and digital mapping to document the location and orientation of objects in the tomb. This is especially valuable because of the great number of artifacts that were recovered, Davis said.

"We can see all levels as we excavated them and relate them one to the other in three dimensions," he said. UC's team will continue working at Pylos for at least the next two years while they and other researchers around the world unravel mysteries contained in the artifacts.

"It has been 50 years since any substantial tombs of this sort have been found at any Bronze Age palatial site. That makes this extraordinary," Davis said. 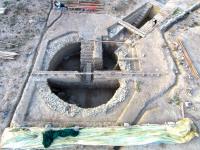