Ida is one stubborn girl. Her remnants have moved out to sea and reformed as a powerful coastal low pressure system that's been raining on the mid-Atlantic since Tuesday night, November 10. The Geostationary Operational Environmental Satellite, GOES-12 captures images of the low's cloud cover several times every hour, and shows its cloud cover stretching from North Carolina up to Maine. Rains are currently confined to the Mid-Atlantic from North Carolina to New Jersey, but will creep north with the progression of the low.

The GOES-12 satellite will continue to track the low's progress and provide satellite imagery for forecasters to pinpoint its position as it moves north. GOES is operated by the National Oceanic and Atmospheric Administration, and NASA's GOES Project, located at NASA's Goddard Space Flight Center, Greenbelt, Md. creates some of the GOES satellite images.

Nags Head, North Carolina will face rain, heavy at times and possibly a thunderstorm. The winds won't be tropical storm force, but they'll be sustained from the northeast between 25 and 30 mph. Like the rest of northeast North Carolina, they're facing a High Wind Warning; Coastal Flood Warning and a Flood Advisory.

The Atmospheric Infrared Sounder (AIRS) instrument that flies onboard NASA's Aqua satellite captured an infrared image of the low's cloud top temperatures. The colder the temperature, the higher the thunderstorms, and the stronger they are (with heavier rainfall). Infrared imagery on November 11 at 1:30 p.m. ET noticed that the low didn't have thunderstorms near the top of the troposphere (which would indicate the strongest storms having cloud tops colder that -63 Fahrenheit). Instead, the low did have cloud tops that were about 240 Kelvin, or minus 27F, indicating thunderstorms that are not as powerful as you'd see in a powerful hurricane, but still with the ability to produce a good amount of rainfall.

Significant flooding has been reported in Norfolk, Virginia this morning. Many roads were reported closed during the early morning hours today, November 12. The Chesapeake Bay Tunnel was reported open at 7:42 a.m. ET today, but could close because of the rain.

NASA's Wallops Island facility in Wallops Island, Virginia, Norfolk, Virginia Beach and all of coastal Virginia areas are facing tropical-storm like conditions today. The National Weather Service has posted a High Wind Warning, Coastal Flood Warning, High Surf Advisory and a Flood Watch. The forecast in those areas today calls for rain, heavy at times. Just like a tropical storm, the coastal low pressure area is kicking up strong winds. Northeast winds along those coastal Virginia areas will be blowing between 33 and 37 mph, with gusts as high as 55 mph.

Even as far inland and Baltimore and Washington, DC, a Flood Watch is in effect for today and Friday, and 1-2" of rain are expected today, with an additional 1-2" of rain overnight and another 1-2" of rain on Friday! So, the Nation's Capital could see up to 6 more inches of rain by Friday evening. Gusty winds between 25-35 mph are also expected.

Between 6-12" of rain are expected in areas from northeast North Carolina to eastern Virginia and southern Maryland and Delaware over the next two days, so residents in those areas could see significant flooding along the coasts and inland.

To see National Weather Service live radar along the Mid-Atlantic and U.S. Northeast, go to: http://radar.weather.gov/Conus/northeast_lite_loop.php

Tomorrow New Jersey and Long Island, New York will receive the brunt of the low and those residents should be clearing their street drains of fallen leaves now, to prevent additional ponding of water and street flooding. 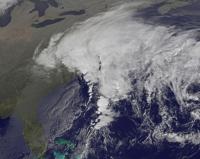