The Transcendental Meditation® technique may be an effective approach to reduce symptoms of depression, according to two new studies to be presented at the 31st Annual Meeting of the Society of Behavioral Medicine in Seattle, Washington April 9th, 2010.

The studies, conducted at Charles Drew University in Los Angeles and University of Hawaii in Kohala included African Americans and Native Hawaiians, 55 years and older, who were at risk for cardiovascular disease. Participants were randomly allocated to the Transcendental Meditation program or health education control group, and assessed with a standard test for depression—the Center for Epidemiological Studies-Depression (CES-D) inventory over 9-12 months.

"Clinically meaningful reductions in depressive symptoms were associated with practice of the Transcendental Meditation program," said Sanford Nidich, EdD, lead author and senior researcher at the Institute for Natural Medicine and Prevention at Maharishi University of Management. "The findings of these studies have important implications for improving mental health and reducing the risk of cardiovascular morbidity and mortality," said Dr. Nidich.

Participants in both studies who practiced the Transcendental Meditation program showed significant reductions in depressive symptoms compared to health education controls. The largest decreases were found in those participants who had indications of clinically significant depression, with those practicing Transcendental Meditation showing an average reduction in depressive symptoms of 48%.

"These results are encouraging and provide support for testing the efficacy of Transcendental Meditation as a therapeutic adjunct in the treatment of clinical depression," said Hector Myers, PhD, study co-author and professor and director of Clinical Training in the Department of Psychology at U.C.L.A.

The results of these studies are timely. For older Americans, depression is a particularly debilitating disease, with approximately 20% suffering from some form of depression. Overall, 18 million men and women suffer from depression in the United States. Depression is a major risk factor for cardiovascular disease, with even a moderate level of depressive symptoms associated with increased cardiac events.

"The importance of reducing depression in the elderly at risk for heart disease cannot be overestimated," said Gary P. Kaplan MD PhD, Clinical Associate Professor of Neurology NYU School of Medicine. "Any technique not involving extra medication in this population is a welcome addition. I look forward to further research on the Transcendental Meditation technique and prevention of depression in other at-risk elderly populations, including those with stroke and other chronic diseases."

The studies were funded by grants from the National Institutes of Health - National Heart Lung and Blood Institute and National Center for Complementary and Alternative Medicine. 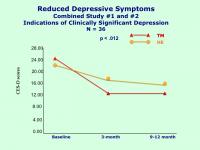