Why people perceive motion in some static images has mystified not only those who view these optical illusions but neuroscientists who have tried to explain the phenomenon. Now Yale neuroscientists have found some answers in the eyes of flies, they report Aug. 24 in the journal Proceedings of the National Academy of Sciences.

It turns out that flies are fooled by optical illusions as easily as humans.

"It was exciting to find that flies perceive motion in static images the same way we do," said Damon Clark, associate professor of molecular, cellular and developmental biology and of physics and of neuroscience at Yale.

The small brains of flies make it easy to track the activity of neurons in their visual system. Two members of Clark's lab, Margarida Agrochao and Ryosuke Tanaka, presented flies with optical illusions similar to the one above. They then measured the flies' behavior to check whether the insects perceive the motion in this optical illusion the same way humans do. Flies instinctively turn their bodies toward any perceived motion; when presented with the optical illusion, the flies turned in the same direction as the motion that humans perceive in the pattern.

At the same time, the researchers examined specific neuron types that govern motion detection in flies and found a pattern of responses created by the static pattern. By turning those same neurons on and off, the researchers were able to change flies' perception of illusory motion. By turning off two types of motion-detecting neurons, they eliminated the illusion entirely. By turning off just one of the two types, they created flies that perceived illusory motion in the opposite direction than they did with both neurons active. Based on this data the researchers theorized that the optical illusion results from small imbalances in how the different types of motion detectors contribute to how flies respond, or don't respond, to illusions.

Since there are similarities between fly and human visual processing, the researchers designed experiments to test whether the theory they developed for flies might also apply in humans. They asked 11 participants to tell them about the motion they saw in the visual illusion. Those experiments suggested -- not surprisingly -- that human visual systems are more complicated than flies', but the results suggested a similar mechanism underlies this illusion of motion in humans.

"The last common ancestor of flies and humans lived a half billion years ago, but the two species have evolved similar strategies for perceiving motion," Clark said. "Understanding these shared strategies can help us more fully understand the human visual system." 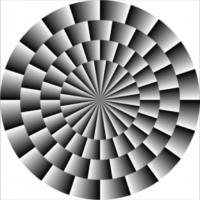