African naked mole-rats are sometimes referred to as animal superheroes. They resist cancer, tolerate pain, and live a remarkably long time. They're also known for their ability to handle high levels of carbon dioxide and can go for several minutes without oxygen. But researchers reporting in Current Biology on April 30 say they may have found the mole-rats' kryptonite: they need high levels of carbon dioxide to function.

"While they thrive in their cramped nest quarters, the air composition just above the surface of their burrows in East Africa makes them vulnerable to seizures," said Dan McCloskey of The City University of New York. "Because that's what happens when naked mole-rats lose carbon dioxide."

In other words, the mole-rats don't just tolerate high levels of carbon dioxide in their crowded nests; it appears that they actually require it. When they reach the hot surface and start heat-induced hyperventilation in the fresh air, it sends them into seizures. In the study now reported, the researchers found that this curious need for carbon dioxide is explained by the presence of a missense mutation in a gene that encodes the major neuronal chloride transporter known as KCC2.

The researchers came to this discovery in an unexpected way. Naked mole-rats have little control over their body temperature and also are prone to seizing in response to heat, they knew. McCloskey and first author of the new study Michael Zions had been exploring this susceptibility to fever-like conditions as a model for fever-induced (febrile) seizures in human children.

The team joined forces with Kai Kaila and Martin Puskarjov, University of Helsinki, Finland. Kaila, an expert in febrile seizures, and Puskarjov had earlier found a mutation affecting KCC2 in families of people prone to them. What they now know is that mole-rats and those families with a genetic predisposition for febrile seizures carry the very same genetic change.

"We knew there was some value in the line of inquiry, but we had no idea that the similarities would go all the way down to the genetic level," Kaila said.

"The identification of the genetic polymorphism in the naked mole-rat KCC2 was a surprise," Puskarjov added. "Aside from a small subset of humans, naked mole-rats are now the only other mammals known to harbor this variant."

Further study yielded more surprises. When the researchers gave a naked mole-rat the anti-seizure drug diazepam, the drug triggered a seizure rather than preventing one. While the result was unexpected, it helped them make sense of years of unusual behavioral and electrophysiological data: the naked mole-rats were relying on carbon dioxide to help them compensate for deficiencies in their brain's inhibitory GABAergic system.

KCC2 is a chloride transporter: its normal job is to control the amount of chloride inside of neurons. In a typical adult mammal, chloride levels in central neurons are kept low. When the neurotransmitter GABA binds to a neuron, chloride enters and blocks the activity of the neuron. This ability to reduce neural activity is essential for many thousands of neurons to work together in coordinated fashion and avoid becoming overexcited. In the naked mole-rat and people with the mutation, KCC2 doesn't clear chloride from neurons as effectively. As a result, this inhibitory cascade doesn't work as well.

"Naked mole-rat brains lack some of the inhibition that a mammal needs. Instead, they're using the carbon dioxide to get back to where they have to be," Zions said. "They prefer CO2 levels that would panic a person, but are troubled by fresh air. They've leveraged a liability to literally dig themselves a niche."

As the researchers explain, an inhibition-impaired brain would normally be a handicap as it is in people prone to febrile seizures. It works for naked mole-rats because they rely on their carbon dioxide-rich environments to help keep their brain within normal parameters. "We believe they are utilizing nest carbon dioxide to offset their impoverished GABA system," Kaila said.

The researchers think the findings may provide an essential clue as to why the naked mole-rats are one of only two mammalian species to evolve eusociality, living together in highly cooperative colonies.

"Low carbon dioxide areas may cause hyperexcitability and overstimulation or anxiety. Their brain physiology urges them to go back to the nest rather than set out on their own," McCloskey said. Support for this idea comes from the researchers' discovery that the only other eusocial mammal, the Damaraland mole-rat, has a slightly different mutation in the exact same location on the KCC2 gene as the naked mole-rat.

In addition to the insights into mole-rat evolution, the findings may also have implications for people who carry the KCC2 variant, including those prone to febrile seizures and people with idiopathic generalized epilepsy, schizophrenia, or autism who in some cases also have the variant, according to the researchers. "The breathing patterns and carbon dioxide needs of these individuals is something to consider," Kaila said.

This work was supported by a National Science Foundation CAREER Award, the Emil Aaltonen Foundation, the Academy of Finland, and the Jane and Aatos Erkko Foundation. 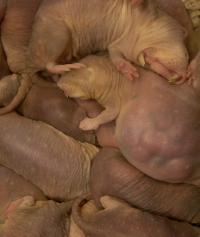 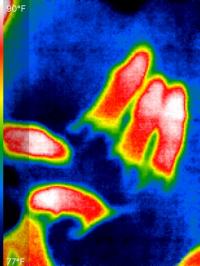