A team of NASA scientists want to use Earth as a laboratory to understand how planets lose their atmospheres and has proposed a mission that the agency recently selected as one of five for further consideration as a possible NASA Explorer mission.

In the proposed mission that some believe is a potential keystone in the study of the Sun and its effects on planetary atmospheres, the team at NASA's Goddard Space Flight Center in Greenbelt, Maryland, is advancing a dual-satellite, polar-orbiting mission to study the universal processes that control atmospheric erosion and its interaction with stellar winds, the continuously flowing stream of charged particles released from the Sun's corona.

Called Mechanisms of Energetic Mass Ejection-Explorer, or MEME-X, the mission was one of five proposals that received Phase-A funding under NASA's Small Explorer Program. NASA also selected another Goddard mission, Focusing Optics X-ray Solar Imager [link to story]. Of the five, NASA is expected to select one or two for development and implementation.

"MEME-X has strong cross threads across NASA's scientific disciplines -- planetary, heliophysics, astrophysics, and Earth science," said Thomas Moore, a Goddard scientist and the MEME-X principal investigator. In addition to providing details about the loss of mass in Earth's upper atmospheric layers, the mission could enhance scientists' understanding of the role that solar wind played in transforming Mars from a warm and wet environment that might have supported surface life on Mars to the cold, arid planet of today, he said.

To that end, MEME-X will focus on one principal question: How do particles escape from Earth's upper atmosphere into the magnetosphere -- the protective bubble that shields the planet from incoming radiation from the Sun -- and then further, out into space. "Atmospheric escape is a fundamental process with wide-reaching consequences across space and planetary sciences," Moore said.

Plasma, the dominant material in space, consists of negatively charged electrons and positively charged ions; that is, atoms that have lost their electrons. It is a fourth state of matter -- not a gas, liquid, or solid -- which conducts electricity and is affected by magnetic fields. On an astronomical scale, plasma is common. It's found in the Sun, in the constant stream of material that flows from the Sun -- the solar wind -- and throughout space. However, on Earth's surface, it's rare, found mostly in fires and in fluorescent and neon lights.

For heliophysics, understanding the outflow of plasma from near-Earth space is particularly crucial, Moore added. The upflow of plasma from the high-latitude polar cap and auroral regions appears to affect the magnetosphere's response to variations in the solar wind and in turn influences space weather, which adds to the challenge of predicting space weather.

"For 40 years, we've had a long-standing mystery about how a portion of the atmosphere is heated by a factor of a hundred or more and ejected into space, where it dramatically modifies the near-Earth environment," said Doug Rowland, MEME-X deputy principal investigator and a heliophysicist at Goddard. "MEME-X, with its pair of miniaturized spacecraft and advanced instrumentation, will finally give us the tools we need to solve this problem."

Equipped with plasma analyzers, which will be mounted on short booms extending along the spacecraft's spin axes, and other instruments developed in part with research-and-development funding, MEME-X would provide the first multipoint measurements of plasma to determine if the matter is being ejected by pressure, as in a geyser, or vacuumed away from Earth, as in a waterspout.

In addition to revealing the plasma outflow's effect on space weather, the mission could help answer important questions regarding the evolution of planetary atmospheres and planet habitability, Moore said.

A case in point is Mars. Once wetter and warmer, and possibly congenial for life, the planet now looks dead. It's a desert world, with a sparse atmosphere and virtually no protective magnetic field. NASA's Mars Atmosphere and Volatile Evolution mission, recently discovered that most of the planet's atmosphere has been lost to space, violently scraped from the planet by solar wind.

The question scientists want to answer is the role of the magnetosphere in atmospheric loss, particularly as it relates to solar wind. "This is a quest to discover and characterize fundamental processes that occur within the heliosphere and throughout the universe," Moore said. "We want to use the Earth's atmosphere as a laboratory." 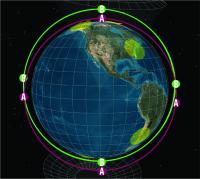