Computer scientists and biochemists at the University of Washington two years ago launched an ambitious project harnessing the brainpower of computer gamers to solve medical problems.

The game, Foldit, turns one of the hardest problems in molecular biology into a game a bit reminiscent of Tetris. Thousands of people have now played a game that asks them to fold a protein rather than stack colored blocks or rescue a princess.

Results published Thursday (Aug. 5) in the journal Nature show that Foldit is a success. It turns out that people can, indeed, compete with supercomputers in this arena. Analysis shows that players bested the computers on problems that required radical moves, risks and long-term vision – the kinds of qualities that computers do not possess.

"People in the scientific community have known about Foldit for a while, and everybody thought it was a great idea, but the really fundamental question in most scientists' minds was 'What can it produce in terms of results? Is there any evidence that it's doing something useful?'" said principal investigator Zoran Popović, a UW associate professor of computer science and engineering.

"I hope this paper will convince a lot of those people who were sitting on the sidelines, and the whole genre of scientific discovery games will really take off," he said.

Scientists know the pieces that make up a protein but cannot predict how those parts fit together into a 3-D structure. And since proteins act like locks and keys, the structure is crucial.

At any moment, thousands of computers are working away at calculating how physical forces would cause a protein to fold. But no computer in the world is big enough, and computers may not take the smartest approach. So the UW team tried to make it into a game that people could play and compete. Foldit turns protein-folding into a game and awards points based on the internal energy of the 3-D protein structure, dictated by the laws of physics.

Tens of thousands of players have taken the challenge. The author list for the paper includes an acknowledgment of more than 57,000 Foldit players, which may be unprecedented on a scientific publication.

"We had to talk to the editors a bit about getting that in there," said first author Seth Cooper, a UW doctoral student in computer science. "I think it's not the standard style of doing things."

The author list is a first step toward the original goal of having many people contribute to scientific research. Players come from all over the world, and are of all ages and educational backgrounds.

"I don't think that there's any sort of real demographic profile that would be a typical Foldit player," Cooper said.

A major challenge in developing the game was to make it fun while still producing valid scientific results, Cooper said. There was a constant back-and-forth between scientists, game developers and players to achieve the best balance.

The class of problems in which humans were able to do better than computers required intuitive leaps or major shifts in strategy. Future work will aim to better combine the strengths of experts, computers and thousands of game players.

"It's a new kind of collective intelligence, as opposed to individual intelligence, that we want to study," Popović said. "We're opening eyes in terms of how people think about human intelligence and group intelligence, and what the possibilities are when you get huge numbers of people together to solve a very hard problem."

The Foldit blog lets players know about updates to the game, upcoming competitions, and special events like online chats with the scientists or game developers.

The Foldit energy calculations are carried out by Rosetta, the procedure for computing protein structures developed by David Baker, a UW biochemistry professor and co-author of the new paper. Baker's group has previously used donated computer cycles through Rosetta@home to help crunch through the trillions of possible orientations for the chains of amino acid molecules that make up proteins.

The human thinking patterns may now help bolster Rosetta's skills. Researchers in Baker's group are analyzing the most successful Foldit strategies and trying to replicate them in the computer-powered version.

This summer the Foldit community has been focused on problems in the Critical Assessment of Techniques for Protein Structure Prediction competition, the world's largest comparison of protein-folding computation strategies. Last year Foldit competed as part of the Baker lab team. This year for the first time Foldit players have their own team, taking on the most sophisticated supercomputers in the world. Contest results will be announced in December.

Now, Foldit players will focus on designing novel proteins. Last year a Texas player who goes by the name "BootsMcGraw" was the first Foldit player to have his new protein design synthesized in the Baker lab. Although this particular structure did not work, the researchers plan to try again and are optimistic about the possibilities.

Players may someday design proteins to disable the flu virus or tackle HIV, or perform tasks outside the body such as cleaning up waste or generating energy.

Cooper has years of experience with computer games and says he "might be classified as a gamer." Now he's found a way to turn this global pastime to the benefit of science.

"We're taking the effort that people put into games and channeling that into something productive and useful for humanity," he said. "We're combining computational power and human brainpower to tackle important problems that neither one of them can do alone." 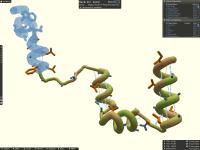 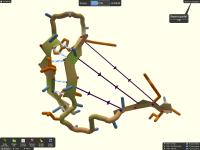