Dissection might prove unnecessary when identifying new molluscs after scientists Corey Whisson, Western Australian Museum, and Dr Abraham Breure, Naturalis Biodiversity Centre, the Netherlands, and Royal Belgian Institute of Natural Sciences, Belgium, described a previously unknown land snail based on its genitalia, yet without damaging the specimen in the slightest. The new species is published in the open access journal ZooKeys.

The biologists described the first new Australian land snail species of this family for the last 33 years thanks to micro-computed tomography (micro-CT) and reconstruction with specialised software. This novel method, likely applied for identification of molluscs for the first time in history, uses X-rays to create cross-sections of the genitalia, so that a 3D model can be created without damaging the specimen. This can be then compared to known related taxa's genitalia in order to show if there are enough differences to prove species delimitation.

The scientists note that despite the satisfying results, micro-CT is time-consuming and "quite laborious" approach. "However, in the case of a single or just a few specimens, this may be an alternative to destructive dissection," says Dr Abraham Breure in his personal blog.

The new land snail, called Bothriembryon sophiarum after Dr Abraham Breure's wife Sophie J. Breure and Corey Whisson's first daughter Sophie Jade Whisson, can only be found along a 180-kilometre line running across the escarpment and cliff tops of the Baxter Cliffs and Hampton Ranges in Western Australia. Given its restricted distributional range, it is considered a short-range endemic.

The mollusc is characterised with a slender high-spired shell, built specifically for the demanding nature of its habitat. Dwelling in rocky limestone substrate, which is often fractured with narrow cracks and fissures, the snail has developed a slender shell, so that it can move easily through cavities and under rocks. On the other hand, being predominantly cream in colour with reddish or greyish brown blotches, it successfully blends with the limestone. 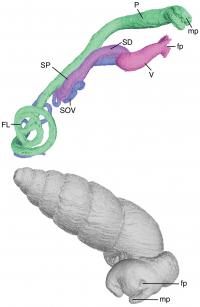