Moss growing on urban trees is a useful bio-indicator of cadmium air pollution in Portland, Oregon, a U.S. Forest Service Pacific Northwest Research Station-led study has found. The work--the first to use moss to generate a rigorous and detailed map of air pollution in a U.S. city--is published online in the journal Science of the Total Environment.

"What's unique about this study is that we used moss to track down previously unknown pollution sources in a complex urban environment with many possible sources," said Sarah Jovan, a research lichenologist at the station based in Portland and one of the study's co-leads.

Moss have been used as bioindicators--living organisms that can help monitor environmental health--by the Forest Service and other agencies for decades. Because moss lack roots, they absorb all of their water and nutrients from the atmosphere, inadvertently taking up and storing whatever compounds happen to be in the air.

"Our study shows that moss bioindicators have the potential to improve air-quality monitoring by serving as a screening tool to help cities strategically place their air-quality monitors," Jovan said. "The heavy metals analysis for moss costs us $50 per site, a low cost that makes it possible to sample extensively and flag hotspots for followup instrumental monitoring."

Jovan and her co-lead Geoffrey Donovan, also with the Pacific Northwest Research Station, launched their exploratory moss study in 2013 with five scientists from the Forest Service and Drexel University's Dornsife School of Public Health. Setting out in a minivan and armed with a ladder and collection equipment, Jovan and Donovan gathered 346 samples of Lyell's orthotrichum moss, a species that grows abundantly on the trunks and branches of hardwood trees across Portland, along a randomized grid.

Initially, the science team was concerned with air pollution from polycyclic aromatic hydrocarbons, a class of potent environmental toxins emitted by the burning of fossil fuels and wood. The scientists added in heavy metals because the laboratory analysis was relatively inexpensive. One heavy metal in particular, cadmium, was also a top concern of the Oregon Department of Environmental Quality (DEQ) because a 2011 DEQ study found discrepancies between predicted and observed concentrations of the metal at Portland's one permanent air-quality monitoring site. Cadmium, which is used primarily in nickel-cadmium battery manufacturing, electroplating, and stained-glass production, is linked to health problems such as kidney disease and cancer.

When their moss sample results came back from the lab, the science team spatially modeled the data to create a fine-scale map of cadmium deposition across the city. Their preliminary results revealed two significant "hotspots" of cadmium levels in moss, both of which were centered on two stained-glass manufacturers. Out of concern for public health, the scientists shared their findings with Oregon DEQ, which responded in October 2015 by placing a mobile air-quality monitoring instrument adjacent to one cadmium hotspot and taking 24-hour readings over the course of nearly a month. This was a necessary step because it was unknown how well concentrations in moss correlated with those in the air. Their results confirmed the high levels of cadmium found in the moss, showing mean cadmium concentrations in the air 49 times higher than Oregon's state benchmark.

"Data from this monitor, along with three others that DEQ was operating at the time, helped us compare our moss data with actual concentrations measured in the air," Jovan said. "We got a very high correlation, suggesting that moss may be able to estimate cadmium levels in the air very accurately, but we acknowledge that four data points is a small sample from which to draw definitive conclusions."

Now that the cadmium study has been published, the scientists are working to produce basic maps of 22 metals and other elements measured in the moss samples that will be published as a peer-reviewed general technical report by the Pacific Northwest Research Station this summer. The raw data for pollutant concentrations in the moss samples will also be released, enabling others to use the scientists' cadmium modeling techniques or employ their own approaches to explore possible sources of metals in Portland's moss. To be notified when this report is published, send an email to pnwinquiry@fs.fed.us with "Moss study list subscription" in the subject line.

The science team is currently uploading the cadmium study's data set; it will be available online later this month.

To learn about impacts and agency responses at the local level, visit SaferAir.

The Pacific Northwest Research Station--headquartered in Portland, Ore.--generates and communicates scientific knowledge that helps people make informed choices about natural resources and the environment. The station has 11 laboratories and centers located in Alaska, Washington, and Oregon and about 300 employees. Learn more online at http://www.fs.fed.us/pnw. 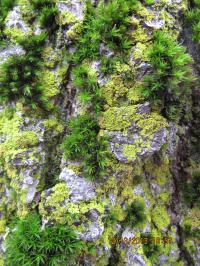