PHILADELPHIA—University of Pennsylvania researchers have successfully genetically engineered the immune cells of 12 HIV positive patients to resist infection, and decreased the viral loads of some patients taken off antiretroviral drug therapy (ADT) entirely—including one patient whose levels became undetectable. The study, appearing today in the New England Journal of Medicine, is the first published report of any gene editing approach in humans.

The phase I study was co-authored by researchers at Penn Medicine, the Albert Einstein College of Medicine and scientists from Sangamo BioSciences, which developed the zinc finger nuclease (ZFN) technology, the T cell therapy approach used in the clinical trial.

"This study shows that we can safely and effectively engineer an HIV patient's own T cells to mimic a naturally occurring resistance to the virus, infuse those engineered cells, have them persist in the body, and potentially keep viral loads at bay without the use of drugs," said senior author Carl H. June, MD, the Richard W. Vague Professor in Immunotherapy in the department of Pathology and Laboratory Medicine at Penn's Perelman School of Medicine. "This reinforces our belief that modified T cells are the key that could eliminate the need for lifelong ADT and potentially lead to functionally curative approaches for HIV/AIDS."

June and his colleagues, including Bruce L. Levine, PhD, the Barbara and Edward Netter Associate Professor in Cancer Gene Therapy in the department of Pathology and Laboratory Medicine and the director of the Clinical Cell and Vaccine Production Facility at Penn, used the ZFN technology to modify the T cells in the patients—a "molecular scissors," of sorts, to mimic the CCR5-delta-32 mutation. That rare mutation is of interest because it provides a natural resistance to the virus, but in only 1 percent of the general population. By inducing the mutations, the scientists reduced the expression of CCR5 surface proteins. Without those, HIV cannot enter, rendering the patients' cells resistant to infection.

For the study, the team infused the modified cells –known as SB-728-T—into two cohorts of patients, all treated with single infusions—about 10 billion cells—between May 2009 and July 2012. Six were taken off antiretroviral therapy altogether for up to 12 weeks, beginning four weeks after infusion, while six patients remained on treatment.

Infusions were deemed safe and tolerable, the authors report, and modified T cells continued to persist in the patients when tested during follow up visits. One week after the initial infusion, testing revealed a dramatic spike in modified T cells inside the patients' bodies. While those cells declined over a number of weeks in the blood, the decrease of modified cells was significantly less than that of unmodified T cells during ADT treatment interruption. Modified cells were also observed in the gut-associated lymphoid tissue, which is a major reservoir of immune cells and a critical reservoir of HIV infection, suggesting that the modified cells are functioning and trafficking normally in the body.

The study also shows promise in the approach's ability to suppress the virus. The viral loads (HIV-RNA) dropped in four patients whose treatment was interrupted for 12 weeks. One of those patients' viral loads dropped below the limit of detection; interestingly, it was later discovered that the patient was found to be heterozygous for the CCR5 delta-32 gene mutation.

"Since half the subject's CCR5 genes were naturally disrupted, the gene editing approach was building on the head start provided by inheriting the mutation from one parent," said Levine. "This case gives us a better understanding of the mutation and the body's response to the therapy, opening up another door for study."

Therapies based on the CCR5 mutation have gained steam over the last six years, particularly after a man known as the Berlin Patient was "functionally" cured. Diagnosed with acute myeloid leukemia (AML), he received a stem cell transplant from a donor who had the CCR5 mutation in both alleles (from both parents) and has remained off ADT since 2008. Researchers are attempting to replicate this phenomenon because allogeneic transplants—which carry a high mortality risk and require lengthy hospitalizations—are not a practical solution for HIV patients who do not have blood cancers. Nor are they effective in ridding the body of HIV unless the donor has the mutated gene in both alleles, as shown recently in two Boston patients who were thought to have been "functionally" cured from transplants, only to see their viral loads spike.

Though disappointing to the research community, the Boston patients' results highlight key factors when combating the virus.

"Those cases emphasize the need to protect T cells from the virus," said Pablo Tebas, MD, director of the AIDS Clinical Trials Unit at the Penn Center for AIDS Research, one of two centers where the study was completed. "The Boston cases show us that for the Berlin patient, it was not the chemotherapy or infusion of a donor's stem cells that staved off the HIV; it was the protection of the T cells by the lack of CCR5. Those procedures couldn't completely eliminate the reservoir of the HIV virus, and when the virus came back the T cells were susceptible to infection. The ZFN approach protects T cells from HIV and may be able to almost completely deplete the virus, as those cells are still functional."

Further clinical trials will evaluate greater numbers of modified T cells in a larger cohort of patients, as well as strategies to increase the persistence of more cells in the body to achieve a therapeutic effect.

This study was supported in part by NIAID Program Project Grant U19 AI066290, by the Penn Center for AIDS Research (P30 AIO4), Clinical Trials Unit (AI069534) and by Sangamo BioSciences. 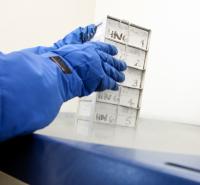 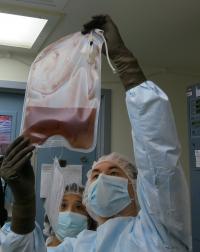