Perovskite solar cells are the rising star in the photovoltaic landscape. Since their invention, less than ten years ago, their efficiency has doubled twice and it is now over 22% - an astonishing result in the renewable energy sector. Taking the name 'perovskite' from the light-harvesting layer that characterizes them, these solar cells are lighter, cheaper, and more flexible than the traditional crystalline silicon-based cells.

Perovskite solar cells are usually exposed to ambient air for several hours after fabrication. This procedure increases their efficiency, even if the reason behind the phenomenon was unclear. The scientific explanation of this practice has now been discovered by researchers from the Energy Materials and Surface Sciences Unit (EMSS) at the Okinawa Institute of Science and Technology Graduate University (OIST) led by Prof Yabing Qi. Their results are published in Advanced Materials Interfaces.

"It's intriguing: why do we need ambient air to enhance the effectiveness of perovskite solar cells?" Zafer Hawash, first author of the study and an OIST PhD student, commented. "Which component of the ambient air is linked to this phenomenon?" Starting from these questions, the researchers focused their attention on the top layer of the solar cells.

The choice was logical, because even if perovskite solar cell contains several layers - all of which may play a role in the cell efficiency - the top-most layer is the one in direct contact with ambient air. Thus, that is the layer most likely affected by the external environment. The layer is called 'hole transport layer', and it has a dopant, which is a substance that enhances the electrical conductivity of the material. "It is known that the dopant of the hole transport layer plays a key role in perovskite solar cells' performance," Hawash said. "But it was not clear how."

The scientists performed controlled exposure of the hole transport layer to environmental gasses, focusing on oxygen, nitrogen, and moisture - water that is in a gas state. Then, they checked the electrical properties of the hole transport layer, using a variety of methods, to see if and how the inside of the transport layer changed. "What we found is that oxygen and nitrogen do not have any role in the redistribution of the dopants," Hawash explained. "But in the case of moisture, the solar cells' efficiency increases. This is the discovery: moisture is the air component that causes the redistribution of the dopant across the material, and thus the enhancement of the electric properties of the solar cells."

During their experiments, the researchers were also able to document the role of oxygen in the solar cells' performance. "Oxygen enhances the electrical conductivity of the transport layer as well, but this effect does not last long," Hawash commented. "But with the right amount of exposure to moisture, the electric proprieties are irreversibly enhanced." 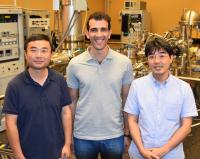