CINCINNATI--Researchers at the University of Cincinnati (UC) College of Medicine and Cincinnati Children's Hospital Medical Center have discovered a target in several types of leukemia that could be treated with an existing Food and Drug Administration (FDA)-approved drug for other types of blood cancers.

These findings, published in the July 5, 2018, advance online edition of Leukemia, provide important results that could offer another treatment option for patients and make it easier for investigators to move more quickly into a clinical trial, since the drug is already approved.

"Granulocyte-colony stimulating factor receptor (G-CSFR) controls the production of certain types of white blood cells, known as neutrophils," says Ken Greis, PhD, professor in the Department of Cancer Biology, member of the Cincinnati Cancer Center and UC Cancer Institute and one of the corresponding authors on the paper. "Mutations in G-CSFR have a harmful effect on the production of neutrophils and are reported in patients with several blood disorders including severe congenital neutropenia (SCN), chronic neutrophilic leukemia (CNL) and acute myeloid leukemia (AML). Unfortunately, despite years of research, the malignant signaling of the mutated G-CSFRs is not well understood."

For this study, researchers used an advanced mass spectrometry-based technology adapted in Greis' lab to create a comprehensive signaling network of the normal versus the mutated receptors to understand how abnormal cellular signaling from the mutant receptors results in disease development.

"We are able to look at a regulatory process in cells known as phosphorylation that results in phosphate groups being attached to the amino acid tyrosine (Tyr) in proteins. These phosphorylation events (pTyr) can act as switches to activate or inactivate proteins and/or specific cellular processes," Greis says.

"By evaluating pTyr activity in the normal versus mutant receptor cells, we can produce a network similar to a wiring diagram of cellular regulation," he adds. "Observed disruptions at any of the nodes in the network for the mutated receptors can then be investigated further to understand and perhaps target the abnormal signaling corresponding to the disease."

"The analysis of the pTyr activity showed differential phosphorylation that included abnormal activation of Bruton's Tyrosine Kinase (Btk), a regulatory protein associated with the maturation of antibody-producing B cells," says H. Leighton Grimes, PhD, director of the Cancer Pathology Program in the Divisions of Experimental Hematology and Pathology at Cincinnati Children's. "When we first got these results, one of the most exciting things was that Btk was already the target of an FDA-approved drug, Ibrutinib, for certain types of B cell lymphoma and lymphocytic leukemia, but it had not been studied or used in neutrophilic diseases."

"Progenitor cells (the precursors from which the neutrophils are made) expressing mutated G-CSFR in animal models and in human blood cells also showed enhanced sensitivity to Ibrutinib compared to the normal G-CSFR, thus confirming that the mutated cells could likely be eliminated by treatment with Ibrutinib and may represent an effective therapy for these patients," he adds.

"These data demonstrate the strength of global proteomics (protein-profiling) approaches, like the pTyr profiling used here, in dissecting cancer-forming pathways and points to the possibility that Ibrutinib could be an effective therapy for myeloid leukemias with G-CSFR mutations," Greis adds. "Further studies are needed to determine if these findings will be applicable in patient samples, but the hope is that clinical trials are just around the corner, since we're investigating a drug that has already been found to be safe by the FDA."

The research is the result of a collaborative effort between the laboratories of Greis and Grimes and was conducted by Pankaj Dwivedi and David Muench, graduate students in the UC Cancer Biology and the Molecular and Developmental Biology doctoral programs.

New target in certain leukemias discovered, could be treated with existing drug 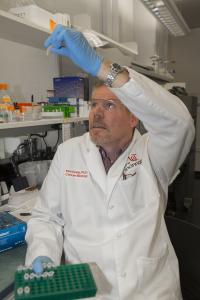