ALBUQUERQUE, N.M. — A Sandia National Laboratories team helped reach a major milestone in the nation's nuclear nonproliferation efforts by working with the Central Asian country of Kazakhstan to move nuclear materials — enough to build an estimated 775 nuclear weapons — to safety.

Sandia provided security and logistics expertise to complete the transfer across Kazakhstan of spent fuel containing 11 tons (10 metric tons) of highly enriched uranium and 3.3 tons (3 metric tons) of weapons-grade plutonium that had been stored in a BN-350 fast-breeder reactor in the busy Caspian Sea port of Aktau in western Kazakhstan, said Dave Barber, who worked for Sandia's Global Physical Security Program at the time.

"We're making things safer in the world," Barber said. "Before it was protected, the materials were vulnerable to theft by those who would steal them to build nuclear weapons. This project has secured enough material to make 775 nuclear weapons. That gives us a great feeling and should make people feel much better."

The removal of the weapons-grade materials marks the completion of 14 years of work that began at Sandia in 1996.

The last concrete and steel cask was transferred to a long-term storage facility in northeast Kazakhstan on Nov. 18. The 1,860-mile journey to get the casks to their resting place there would be like traveling from Washington, D.C., to Albuquerque through a sparsely populated, moonscape-like steppe.

Sandia conducted vulnerability studies that Barber used to brief Congress, the Pentagon, and members of the National Security Council.

The BN-350 at the Mangistau Atomic Energy Complex, which started operations in 1973, produced plutonium for the former Soviet Union's weapons program. The plant also provided 135 megawatts of electricity, 9 million gallons of water per day and steam for hot water and heating for Aktau. Since it was shut down by the Kazakh government in 1999, gas turbines generate the power, desalination of water and steam for the region.

The reactor sits on the eastern shore of the Caspian Sea. The bustling port is a point of departure for ships carrying oil from Kazakhstan to Baku, Azerbaijan, where it enters pipelines that take it to Europe.

The fuel rods were placed into canisters, which were then put into 60 100-ton concrete and stainless steel casks. The casks were stored on a pad outside the reactor before being loaded into shipping containers to make the four-day train journey to Kurchatov, where they would be unloaded and placed onto trucks for the trip to their long-term storage facility.

Sandia worked with Kazakhstan's Ministry of Interior troops, providing them with technical advice, communications equipment and other support, Barber said.

To make sure all would go smoothly, in December 2009, Barber was one of three Americans who traveled on the train during a dry run to ensure that the security plan worked, that the loading and unloading of the casks went off without a hitch and that communications were reliable.

John Franklin of Sandia's National Security Studies Department researched options for procuring two railcars that carried guards on the train, one serving as a backup in case the other was hit. Before the train left, rail crews checked the thousands of miles of tracks for explosives. The trains were given top priority as they crossed the country, Barber said.

During that four-day train ride, Barber said he looked for changes in the terrain that adversaries could use to attack the trains along the route. He needn't have worried.

"What we found was that one end of Kazakhstan looks much like the other end. It was very flat, no real hills, few trees," he says. "We could count the number of trees."

The real runs started in February, and the dozen trips from Aktau to Kurchatov and then to the final location went smoothly, Barber said.

"There were no incidents during the hot runs when we had the fuel in there," Barber said. "We count that as a success." 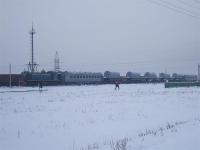 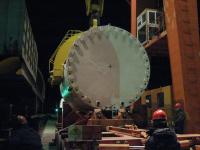