For some young people, dealing with life stressors like exposure to violence and family disruption often means turning to negative, risky behaviors -- yet little is known about what can intervene to stop this cycle.

But one long-term study by the University of Cincinnati looks at the link between stressful life events and an increase in substance abuse, risky sexual behaviors and delinquency in a diverse population of 18- to 24-year-old youths. The research also sheds light on distinct coping strategies that can lead to more positive outcomes.

As part of a 10-year study looking at risk-taking and decision-making -- or the lack thereof -- Jacinda Dariotis, UC public health researcher, spent 12 months focusing on early life stressors as a predictor of risky sexual behavior, substance abuse and delinquency for more than 125 at-risk youths. Surprisingly, she found a small number of the youths were already engaging in constructive coping behaviors on their own that will have positive outcomes later in life.

But what about the majority of troubled youth who cope by engaging in negative, risky and dangerous behaviors?

Results from the most recent segment of Dariotis' study were presented at the American Public Health Association conference in Atlanta, under the title,"Stress coping strategies as mediators: Toward a better understanding of sexual, substance and delinquency-related risk-taking among transition-aged youth."

The study revealed that in spite of early life stressors, positive coping behaviors, either learned or self-generated, can actually have a protective effect.

"We found that many of these youths who had endured stressful life events and otherwise would have fallen into the risky behavior trap could actually have positive outcomes later in life because they chose to join in prosocial physical activities, yoga or mindfulness meditation," says Dariotis.

During the study, Dariotis looked at the disconnect between the youths who had intended to have positive influences in their lives but continually found themselves engaged in behaviors that had negative outcomes. She found a link between stressful life events and increased risky unprotected sex, violence and substance abuse.

"We took a holistic approach, looking at these issues from a social and biological perspective," says Dariotis, also director of UC's College of Education, Criminal Justice and Human Services Evaluation Services Center. "In addition to question-and-answer information, we collected urine samples for drug use confirmation and testosterone levels early in the study to see how hormones played out in negative behaviors."

According to Dariotis, testosterone can be influential in dominance and aggressive behaviors, but if directed through prosocial behaviors like sports, yoga or healthy competition it can have very positive outcomes.http://dx.doi.org/10.1016/j.psyneuen.2016.01.019

"If you are the star on your sports team you are succeeding," says Dariotis. "You can also be competitive academically where you succeed by competing with your peers."

It's not that testosterone itself is all bad but it depends on how it is channeled, she adds.

Before joining UC as an associate professor of research, Dariotis spent the last decade at Johns Hopkins University gathering most of the data that includes neuroimaging and weekly questioning for hundreds of youth from all walks of life.

"I'm particularly interested in teaching at-risk youths to regulate their thoughts, processes and emotions," says Dariotis. "The neuroimaging allows us to see what's activated in one's brain while at rest or performing tasks to help us understand the intersection between hormones, brain structure and activity."

Dariotis found youths who were unable to develop positive coping strategies were much more likely to turn to greater risk-taking behaviors that included unprotected sex or sex for money, substance abuse, violence and crime.

Participating in weekly mindful yoga intervention programs as part of the current study taught the youths how to take control of their breathing and their emotions and helped them develop healthier long-term coping skills.

Given the relative low cost of such programs and easy adaptations to different populations and settings, Dariotis says the return on investment may be substantial especially if they can reduce arrests, repeat offenses and other negative outcomes for risk-taking youth. 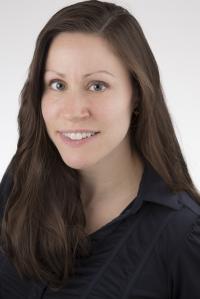