Professor Dongsoo Har and his team in Cho Chun Shik Graduate School of Green Transportation in Korea Advanced Institute of Science and Technology (KAIST) lately developed an aerial vehicle that is able to control the main wings separately and independently.

Aerial vehicles in a typical category have main wings fixed to the body (fuselage) in an integrated form. Shape of main wings, namely airfoil, produces lift force, thanks to aerodynamic interaction with air, and achieves commensurate energy efficiency. Yet, it is difficult for them to make agile movements due to the large turn radius. Banking the aerial vehicle that accounts for eventual turn comes from the adjustment of small ailerons mounted on the trailing edge of the wings.

Aerial vehicles in another typical category gain thrust power by rotating multiple propellers. They can make agile movements by changing speed of motors rotating the propellers. For instance, pitch (movement up and down along vertical axis) down for moving forward with quadcopters is executed by increased speed of two rear rotors and unchanged or decreased speed of two front rotors. Rotor represents revolving part of motor. However, they are even less energy-efficient, owing to the absence of lift force created by wings.

Taking these technical issues of existing types of aerial vehicles into account, his team designed the main wings of the aerial vehicle to be controlled separately and independently. Their aerial vehicle (named Nsphere drone) executing all the thinkable flight modes, pitch/yaw(twisting or rotating around a vertical axis)/roll(turning over on a horizontal axis), is sketched in Figure 1 and actual flight of the aerial vehicle carrying out all possible types of flight modes is shown in Figure 2. Nsphere drone facilitates controlling the tilting angles of main wings and thus the direction of thrust power created by motors on the leading edge of main wings. Additional motor at the tail of Nsphere drone provides extra lifting force when trying vertical take-off and offers extra thrust power, by tilting the motor upward, while flying forward. Nsphere drone can change flight mode in the air from vertical to horizontal and vice versa. Due to the ability in rotating wings as well as changing the direction of thrust power come by the tail motor, the Nsphere drone with independently controlled wings can take off and land vertically without runway and auxiliary equipment.

Someone might say that it is similar to aerial vehicles that have tilt rotors attached to fixed wings for vertical take-off and landing. However, advantage of Nsphere drone is the ability in tilting each main wing entirely, thereby changing angle of attack of each wing. Angle of attack indicates the angle between the oncoming air or relative wind and a reference line on the aerial vehicle or wing. In general, lift force is affected by the angle of attack. Therefore,

The trial to separate main wings entirely from the fuselage is very challenging. The separation of the main wings is realized by using supports that hold the main wings. One support penetrates both wings and two separate supports grab wings individually. It is also possible to apply this technology to large size aerial vehicle by including the fuselage as a part of the support for tilting wings. Part of the fuselage can be redesigned and integrated with main wings, taking plug-in structure to be coupled to the main fuselage and to stand thrust and air pressure.

Nsphere drone controls each wing independently according to target flight mode. The output of the control is sensed by sensors installed in Nsphere drone and undergoes an adjustment process until desired flight operation is achieved. Through this operational process, the Nsphere drone can make agile movements in ways that might not be attained by other aerial vehicles.

The team expects that the Nsphere drone, which is able to acquire energy efficiency, swiftness and speed, can be adopted for short and mid-distance air traffic delivery. Particularly, it can be distributed like the flying taxi announced by Uber and NASA in November 2017 and it can be effectively used for logistics delivery services such as Amazon's Prime Air.

Professor Har said, "Nsphere drone can be used for various fields, including airway transportation, military aerial vehicles, surveillance, general safety management, and logistics delivery services. Separate and independent control of the main wings gives us the chance to employ diverse and effective flying methods. Imagine a jet fighter that is able to evade a missile by the separate control of main wings. Just a bit of control could be enough for evading. Our flight mechanism is valid across the range of flight speed".

At the beginning of the design process in 2016, his team filed patents to countries including Korea, U.S., and China, on various implementation methods, including plug-in structure coupled to the main fuselage, for separate and independent control of main wings. 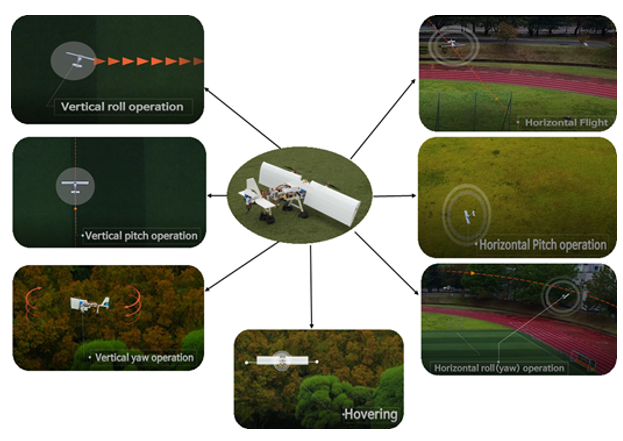