Solvent-free chemistry, more common in Europe and Asia, is gaining notice among American manufacturers due to environmental concerns and rising costs in reducing toxic waste. Research out of the University of Cincinnati finds that this sustainable approach to chemistry, while noisier, can be just as reliable for chemical reactions without the drawbacks. Plus, its recycling ability cuts costs on investing in expensive reagents. James Mack, a University of Cincinnati associate professor of chemistry, is the only American speaker invited to present research at the International Symposium on Mechanochemistry, which will be held June 6-7, at the University of Science and Technology of China (USTC), Hefei.

Mack's presentation on UC discoveries in mechanochemistry will explore how some chemical reactions using mechanochemistry are the same as using traditional solvent methods to cause reactions, which can be toxic to the environment. "The impact force in mechanochemistry provides the energy required to overcome the activation barrier that results in mixing chemicals at the molecular level without using solvents," says Mack.

Mack explains that in mixing active pharmaceuticals, for example, the amount of free agents that need to be mixed is only 7 percent, while the amount of solvent used for the reaction - later disposed of as waste - is 56 percent. Disposal of that waste is growing more costly under EPA standards. "By reducing the solvent used in the process, you reduce the total amount of waste that's generated in a chemical reaction under traditional chemistry methods," Mack says. "It's a new way of understanding chemistry."

"Our goal is to understand the ramifications of not having a solvent - how things are the same, how things are different - and if we can develop a knowledge base of chemistry using this methodology, then we might be able to replace some of the traditional processes that are currently used," says Mack.

Mack adds that while some solvents are considered less harmful to the environment, the most environmentally toxic solvents are what chemists commonly use in order to get non-polar molecules, which are found in plastics and cloth, to dissolve. "They are toxic, carcinogenic or highly volatile," says Mack. "Chemical reactions can send them into the atmosphere, adding to pollution or ozone depletion. So, if we can eliminate that aspect from chemistry during chemical reactions, then we have a much better chance to preserve our environment for future generations."

Mack adds that not only is the method a savings for the environment but also a financial savings, which isn't always associated with sustainability trends. The metal vials used to cause reactions in mechanochemistry can be reused. In longtime traditional approaches to using metals to catalyze reactions - expensive metals such as gold and iridium - the molecule is lost in the catalytic cycle. "What we do instead is we use the metal of the vial or a foil and just line it with the metal, and use that as a catalytic material. The metal is not depleted. It gets recycled over and over again. So we have different vials made out of different materials that can do different things."

Mack's research is supported by a $367,835 Chemical Structure, Dynamics and Mechanisms grant from the National Science Foundation.

The UC Department of Chemistry conducts scholarship and research in a variety of pioneering areas including drug design and delivery; green chemistry; chemical and biochemical sensors; and biophysical methods.

All shook up for greener chemistry 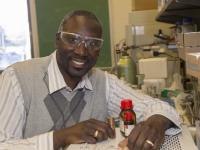 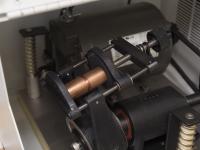