Scientist Heinz Frei has spent decades working toward building an artificial version of one of nature's most elegant and effective machines: the leaf.

Frei, and many other researchers around the world, seek to use photosynthesis - the sunlight-driven chemical reaction that green plants and algae use to convert carbon dioxide (CO2) into cellular fuel - to generate the kinds of fuel that can power our homes and vehicles. If the necessary technology could be refined past theoretical models and lab-scale prototypes, this moonshot idea, known as artificial photosynthesis, has the potential to generate large sources of completely renewable energy using the surplus CO2 in our atmosphere.

With their latest advance, Frei and his team at the Department of Energy's Lawrence Berkeley National Laboratory (Berkeley Lab) are now closing in on this goal. The scientists have developed an artificial photosynthesis system, made of nanosized tubes, that appears capable of performing all the key steps of the fuel-generating reaction.

Their latest paper, published in Advanced Functional Materials, demonstrates that their design allows for the rapid flow of protons from the interior space of the tube, where they are generated from splitting water molecules, to the outside, where they combine with CO2 and electrons to form the fuel. That fuel is currently carbon monoxide, but the team is working toward making methanol. Fast proton flow, which is essential for efficiently harnessing sunlight energy to form a fuel, has been a thorn in the side of past artificial photosynthesis systems.

Now that the team has showcased how the tubes can perform all the photosynthetic tasks individually, they are ready to begin testing the complete system. The individual unit of the system will be small square "solar fuel tiles" (several inches on a side) containing billions of the nanoscale tubes sandwiched between a floor and ceiling of thin, slightly flexible silicate, with the tube openings piercing through these covers. Frei is hopeful that his group's tiles could be the first to address the major hurdles still facing this type of technology.

"There are two challenges that have not yet been met," said Frei, who is a senior scientist in Berkeley Lab's Biosciences Area. "One of them is scalability. If we want to keep fossil fuels in the ground, we need to be able to make energy in terawatts - an enormous amount of fuel. And, you need to make a liquid hydrocarbon fuel so that we can actually use it with the trillions of dollars' worth of existing infrastructure and technology."

He noted that once a model meeting these requirements is made, building a solar fuel farm out of many individual tiles could proceed quickly. "We, as basic scientists, need to deliver a tile that works, with all questions about its performance settled. And engineers in industry know how to connect these tiles. When we've figured out square inches, they'll be able to make square miles."

Each tiny (about 0.5 micrometer wide), hollow tube inside the tile is made of three layers: an inner layer of cobalt oxide, a middle layer of silica, and an outer layer of titanium dioxide. In the inner layer of the tube, energy from sunlight delivered to the cobalt oxide splits water (in the form of moist air that flows through the inside of each tube), producing free protons and oxygen.

"These protons easily flow through to the outer layer, where they combine with carbon dioxide to form carbon monoxide now - and methanol in a future step - in a process enabled by a catalyst supported by the titanium dioxide layer," said Won Jun Jo, a postdoctoral fellow and first author of the paper. "The fuel gathers in the space between tubes, and can be easily drained out for collection."

Importantly, the middle layer of the tube wall keeps the oxygen produced from water oxidation in the interior of the tube, and blocks the carbon dioxide and the evolving fuel molecules on the outside from permeating into the interior, thereby separating the two very incompatible chemical reaction zones.

This design mimics actual living photosynthetic cells, which separate oxidation and reduction reactions with organic membrane compartments inside the chloroplast. Similarly in line with nature's original blueprint, the team's membrane tubes allow the photosynthetic reaction to occur over a very short distance, minimizing the energy loss that occurs as ions travel and preventing unintended chemical reactions that would also lower the system's efficiency.

"This work is part of Berkeley Lab's commitment to contribute solutions to the urgent energy challenges posed by climate change," said Frei. "The interdisciplinary nature of the task requires the breadth of expertise and major facilities unique to Berkeley Lab. In particular, the nanofabrication and imaging capabilities of the Molecular Foundry are essential for synthesizing and characterizing the ultrathin layers and making square-inch-sized arrays of hollow nanotubes."

Funding to support this work was provided by the Energy & Biosciences Institute through the EBI-Shell program. Portions of this work were performed at the Berkeley Lab's Molecular Foundry, a DOE Office of Science user facility. 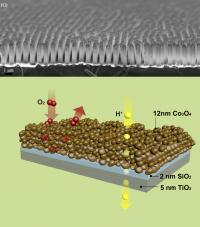