The bodies of Svalbard reindeer are extremely well adapted to their arctic home at 79 degrees N latitude. As the northernmost reindeer population on the planet, they are thick and round, which makes it easier for them to tolerate the cold.

They're shorter, smaller and much more sedentary than their cousins on mainland Europe and North America, too. All these characteristics make them much more physiologically efficient, enabling them to survive long cold nights on the sparse vegetation on the island archipelago.

Given Svalbard's extreme winters, however, you might guess that global warming might make it easier for the roughly 20000 reindeer that live there to thrive. A new study from a team of researchers led by the Norwegian University of Science and Technology shows that this isn't necessarily so.

Winter climate change now makes for tougher conditions for these reindeer -- enough to force them to eat seaweed, which is not their normal fodder, the researchers report in an article in Ecosphere. But this adaptive behaviour may be one key to their long-term survival.

Biologist Brage Bremset Hansen, from the Norwegian University of Science and Technology's Centre for Biodiversity Dynamics, and his colleagues have been studying reindeer on Svalbard for decades -- long enough to begin to notice an increasing number of warm winters where rain would fall on the snowpack, creating an impenetrable layer of ice on the ground.

The layer of ice makes it difficult, if not impossible, for reindeer to get at the small plants and grasses they graze on during the winter. So what do the reindeer do? They start eating seaweed, Hansen and his colleagues from the Norwegian Polar Institute, the University of Alaska Anchorage, the University of Aarhus in Denmark and UNIS, the University Centre in Svalbard found.

The researchers started their study because of one particularly bad winter when the tundra was covered with ice. Then, they observed that roughly one-third of all the reindeer they saw were feeding at the shore, rather than trying to paw through the ice to reach tundra grasses.

Hansen said he and his colleagues assumed the reindeer were feeding on seaweed, "but of course you need more hard-core evidence to show that this was linked to poor conditions, not just coincidence."

So they devised a way to figure out if indeed reindeer were eating seaweed, and why.

This involved -- and there is no polite way to say it -- collecting and testing their poop. It turns out that researchers can distinguish between different kinds of food animals eat by testing their hair or their scat for isotopes.

In this case, the researchers collected reindeer poop from animals that were in habitats near the shore as well as from animals that lived in areas far from the shore. They then looked at stable isotope ratios of carbon, nitrogen and sulphur, all of which will have values that are detectably different in scat from reindeer that eat seaweed compared to scat from reindeer with a more traditional diet of terrestrial plants.

The researchers also had nine years of data for ground ice thickness, which they called basal ice. They combined this with GPS collar data, and location data from a total of 2199 reindeer observations during those years. They were then able to calculate where the reindeer were with respect to the coastline, and to see if more reindeer went to the coast to feed in years when the ground ice was thicker.

It turns out that, yes, when thick ice covered their preferred food, reindeer will eat seaweed, the researchers found.

But they don't exclusively feed on seaweed, the stable isotope and GPS collar data suggested, and instead eat as a supplementary source of nutrition.

"It seems they can't sustain themselves on seaweed. They do move back and forth between the shore and the few ice-free vegetation patches every day, so it is obvious that they have to combine it with normal food, whatever they can find," Hansen said, adding that the researchers had not done any physiological tests to see how much nutrition the reindeer actually get from seaweed.

Eating seaweed may provide a few extra calories to the reindeer, but it came at a cost: seaweed eaters had a lot of diarrhea, probably from the salt, Hansen said.

"When conditions are harsh, during bad winters, the reindeer do tend to be more often at the beach, and yes, they eat seaweed, confirming our hypothesis," Hansen said. Although eating seaweed isn't ideal, he said, it does show the animals are able to adapt, which is the good news.

"The bigger picture is that, although we sometimes observe that populations crash during extremely icy winters, the reindeer are surprisingly adaptive," he said. "They have different solutions for new problems like rapid climate change, they have a variety of strategies, and most are able survive surprisingly hard conditions." 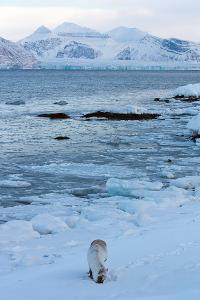