An Asian elephant named Koshik can imitate human speech, speaking words in Korean that can be readily understood by those who know the language. The elephant accomplishes this in a most unusual way: he vocalizes with his trunk in his mouth.

The elephant's vocabulary consists of exactly five words, researchers report on November 1 in Current Biology, a Cell Press publication. Those include "annyong" ("hello"), "anja" ("sit down"), "aniya" ("no"), "nuo" ("lie down"), and "choah" ("good"). Ultimately, Koshik's language skills may provide important insights into the biology and evolution of complex vocal learning, an ability that is critical for human speech and music, the researchers say.

"Human speech basically has two important aspects, pitch and timbre," says Angela Stoeger of the University of Vienna. "Intriguingly, the elephant Koshik is capable of matching both pitch and timbre patterns: he accurately imitates human formants as well as the voice pitch of his trainers. This is remarkable considering the huge size, the long vocal tract, and other anatomical differences between an elephant and a human."

For one thing, Stoeger says, elephants have a trunk instead of lips. While their large larynx can produce very low-pitched sounds, Koshik's speech mimicry exactly copies the pitch and other characteristics of his human trainers' voices. A structural analysis of Koshik's speech showed not just clear similarities to human voices, but also clear differences from the usual calls of elephants.

There have been some earlier reports of vocal mimicry in both African and Asian elephants. African elephants have been known to imitate the sound of truck engines, and a male Asian elephant living in a zoo in Kazakhstan was said to produce utterances in both Russian and Kazakh, but that case was never scientifically investigated.

In the case of Koshik, Angela Stoeger, Daniel Mietchen, Tecumseh Fitch, and their colleagues confirmed that Koshik was imitating Korean words in several ways. First, they asked native Korean speakers to write down what they heard when listening to playbacks of the elephant's sounds.

"We found a high agreement concerning the overall meaning, and even the Korean spelling of Koshik's imitations," Stoeger says. But as far as the scientists can tell, Koshik doesn't actually mean what he says.

It's not completely clear why Koshik adopted his unusual vocal behavior, but the researchers suggest that it might go back to his days as a juvenile. Koshik was the only elephant living at the Everland Zoo in South Korea for about five years, during an important period for elephant bonding and development. Humans were his only social contacts.

"We suggest that Koshik started to adapt his vocalizations to his human companions to strengthen social affiliation, something that is also seen in other vocal-learning species—and in very special cases, also across species," Stoeger says.

An elephant that speaks Korean 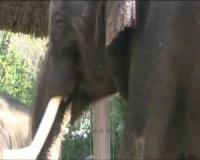 An Elephant that Speaks Korean (2 of 3)

An Elephant that Speaks Korean (3 of 3)