"Abominable mystery" -- the early origin and evolution of angiosperms (flowering plants) was such described by Charles Robert Darwin. So far, we still have not completely solved the problem, and do not know how the earth evolved into such a colorful and blooming world.

Recently, a new angiosperm was reported based on numerous exceptionally well-preserved fossils from the Lower Cretaceous of Jiuquan Basin, West Gansu Province, Northwest China. The new discovery is the earliest and unique record of early angiosperms in Northwest China. The study has been accepted for publication in the journal National Science Review and is currently available online at https://doi.org/10.1093/nsr/nwab084.

The new angiosperm was named Gansufructus saligna, and all the fossil specimens were collected from the grayish green mudstone of the upper Zhonggou Formation in Hanxia Section. Remarkably, the plant fossils are almost completely preserved with branched axes, attached leaves and paniculate infructescences, providing valuable materials for the morphological studies of early angiosperms.

Gansufructus saligna is erect and graceful, three to four times branched, with alternate arranged axes and leaves. Leaves are simple and willow-shaped, leaf margin is entire, leaf apex is acute and leaf base is decurrent and estipulate with short petiole. Leaf venation is poorly organized with low-rank venations, primary vein prominent, secondary veins pinnate, and tertiary veins reticulate. The infructescences are loose panicles bearing fruits in different stages of maturity. Each fruit is formed from four basally syncarpous carpels borne in a whorle arrangement. And each carpel subtended by a small and persistent tepal at the base and contains three to five anatropous seeds.

Gansufructus saligna is supposed to be a small, slender plant with flexible stems, delicate leaves and paniculate infructescences, and is suggested to be a terrestrial herbaceous eudicot based on the morphology of both vegetative and reproductive organs. It probably grew along the lakeshores, where the environment is low-lying and humid. Moreover, the current fossil specimens together with other fossil records of early angiosperms from the Jehol biota and other regions, indicate that the presence of diverse early eudicots of low stature colonizing areas during the middle-late Early Cretaceous. This study is of great significance in exploring the origin, evolution, diversity and habitat preferences of early eudicots. 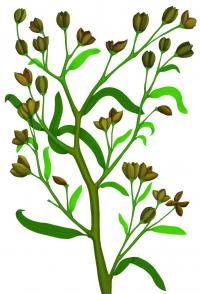